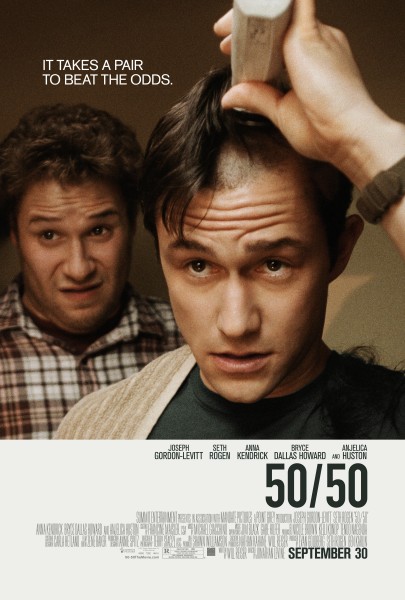 Storyline: Adam lives a normal life in the offices of a radio station where he has spent a lot of time on a story about volcano’s. He has a girlfriend and a best friend and life is running smoothly for him. That all changes however, when he is suddenly diagnosed with a rare malignant cancer. Now it is all he has to do to keep everything together and to not fall apart. This is the story of a guy who has to learn to deal with a new perspective on life.

This film is one that brings forth so many thoughts and feelings that it instantly ranks high. The premise of this film may not seem that great and may give off a bad vibe but this film is undeserving of that as it is, quite simply, one of the best films of 2011. Therefore, it is with hope that this film manages to attain large audiences so that everyone can experience just how good it is.

While the storyline of this film does seem to be tragic, the way that it is portrayed in this film is purely brilliant. With the right mix of humour and seriousness, this film truly hits the right spot and your left wondering if you should be laughing or crying. This alone should make the film stand out as one to watch but with brilliant cinematography and an amazing soundtrack, this film just has it all.

Joseph Gordon-Levit performs the role of a lifetime in this film and reminds everyone just how great and versatile an actor he actually is. There isn’t a moment in the film that you feel he was wrongly cast and he brings emotions out in you that you may have forgotten even existed. However, and possibly luckily, his star performance doesn’t overshadow the charming performances of Seth Rogan and Anna Kendrick. In fact, Seth may have performed his best with this film which is almost completely void of awkward, hair-tugging moments and instead shows that he actually can act. Anna, as well, shines throughout the film and shows that she will not be stepping away from the spotlight anytime soon.

This film was brilliantly written by Will Reiser who has come up with a concept that is, unfortunately, something almost everyone can relate to. He has written a script that allows audiences to watch how people can, and do, cope under horrible circumstances. Of course, the script alone cannot be given full credit as it is also due to the director, Jonathon Levine, that this film has been made so well. Every decision he made flowed extremely well and created a marvellous and eye-watering film.


With scenes that make you cry, as well as ones that make you die of laughter, this film seems to have it all. A brilliant script and cast. It is for this reason that every body should take themselves to go and see it. An absolute gem of a film.