Hey Guys!
So today I am introducing you to the wonderful author Frank Nappi. I will be asking him some questions about his new book Sophmore Campaign: A Mickey Tussler Novel, for you all to read over and enjoy!
Hope it helps you get a better insight into him and his novels!

Hello Frank! Welcome to A Daydreamer’s Thoughts! Let’s start with something simple, tell us a little bit about yourself, anything you would like your readers to know.
I am a teacher and a writer. I live on Long Island with my wife Julia and our two sons, Nick and Anthony. I enjoy writing (obviously), the beach, country music, and baseball.

Sounds lovely! So, how long have you wanted to be a writer?
Well, I have written most of my life. It’s an essential part of who I am. I have only entertained the idea of writing professionally, however, for a few years. I had the good fortune of publishing my first novel (Echoes From The Infantry) in 2005 after I forged a friendship with two very special WWII veterans. They became two of my very best friends despite the age difference. They changed my life forever. That fortuitous happening has become the impetus for these other endeavours.

That sounds amazing, I’m glad they became friends for life! What do you do when you’re not typing away at the keyboard coming up with new ideas?
I spend most hours with my family. I can usually be found outside, either on a baseball field or walking on the beach. Both are very therapeutic for me.

So now we know more about you, what about your book? What is it all about?
The Legend of Mickey Tussler Series is a a deeply complex look into the plight of the underdog, and a sobering reminder that everywhere we turn, and perhaps where we least expect it, there exists these diamonds in the rough. All we need do is look. It is also a celebration of the power of perseverance and resiliency in the face of adversity. It is a sobering reminder that all around us there exists special folks who despite superficial differences are essentially just like us. The stories also (hopefully) foster tolerance, understanding and compassion as several characters struggle with self actualization. I have also been told – and I say this with unbridled enthusiasm—that the books are filled with authentic, breathtaking baseball action. That means the world to a baseball junkie.

Sophomore Campaign is the second book involving Mickey Tussler, can you tell us anything about the first book?
The first book introduces the world to Mickey Tussler – a young man with an incomprehensible talent. Mickey, who is autistic, is discovered serendipitously on a farm in Indiana by minor league baseball coach Arthur Murphy. As the story unfolds and Mickey tries to assimilate with his baseball teammates, the reader gets a real glimpse into the world as seen through the eyes of an autistic person. It is not the safe, predictable place that most of us enjoy.

Would you say that readers need to have read the first one in order to understand or enjoy the second?
No, the second book can be read exclusive of the first. There are flashbacks that fill in some of the gaps. However, in order to truly appreciate the journey that the major characters have experienced, knowledge of the first book is essential.

Who would you say was your target audience?
Well, I think the book appeals to several groups. Naturally, the nature of the story and the age of the protagonist make it a perfect fit for YA readers – especially those who enjoy sports stories. However, I have found that many adults, women included, who have an affiliation with a special needs family member or friends have found the stories compelling and on a larger level inspiring. Baseball worshippers like myself also will find much to appreciate.

Describe Mickey Tussler in three sentences.
Mickey Tussler is a young man who is pure of heart. He is shy, uncertain, and often ill equipped to deal with the unpleasant side of people. He also possesses a remarkable throwing arm, something which leads to his baseball prowess.

Mickey has autism, is there a story behind this?
The idea to place Mickey of the Spectrum was an outgrowth of my work with Challenger Baseball and with Best Buddies. There are so many incredibly talented special needs young people who often times go unnoticed.

When writing your story, what message were you trying to get across to audiences?
That in life, all of us are basically on the same quest. We are looking for happiness and acceptance and all of us fear the opposite. The challenge becomes that much greater for one who is given additional obstacles to conquer. In the book, several characters struggle with this very issue to varying degrees.

Did you know that you would write a sequel to The Legend of Mickey Tussler?
No. When I finished the first book, I thought that was it. However, as I thought more and more about the characters and the way the first story concluded, I knew that there was just too much unfinished business.

How does it feel when someone gives your book a good review?
exhilarating, rewarding, fulfilling

And finally, do you have any advice for any aspiring writers out there?
Just keep writing…this is a tough business replete with all sorts of rejection. The only recourse one has is to just keep writing.

and a quick fire round;

Thank you for joining us today Frank! It was a pleasure getting to know you and I am definitely intrigued about your novels!
To find out more about Frank you can find him on his website, twitter, goodreads and bleacher report. 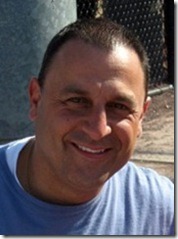 Frank Nappi has taught high school English and Creative Writing for over twenty years. His debut novel, Echoes From The Infantry, received national attention, including MWSA’s silver medal for outstanding fiction for 2006. His follow-up novel, The Legend of Mickey Tussler, garnered rave reviews as well, including a screenplay adaptation of the touching story which aired nationwide in the fall of 2011 (A Mile in His Shoes starring Dean Cain and Luke Schroder). Frank continues to produce quality work, including The Legend of Mickey Tussler: Sophomore Campaign, the intriguing sequel to the much heralded original story, and is presently at work on a third installment of the unique series. Frank lives on Long Island with his wife Julia and their two sons, Nicholas and Anthony. 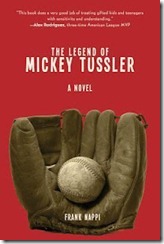 Seventeen-year-old Mickey Tussler is recruited to play for a minor league affiliate of the Boston Braves. Arthur Murphy swears Mickey has the greatest arm he has ever seen, that anybody has ever seen.  And it might be true.  But Mickey’s autism is prohibitive.  It keeps him sealed off from a world he scarcely understands.  Lost both in the memory of his former life with an abusive father and the challenges of a new world filled with heckling teammates, opponents and fans, there’s no way Mickey can succeed.  But his inimitable talent — one of the most gifted arms in the history of baseball — gives him a chance. Can he survive a real life dream?  Or are the harsh realities of life too much for him?  This is the powerful underdog story of how a young man with an extraordinary gift comes of age in a harsh and competitive world. 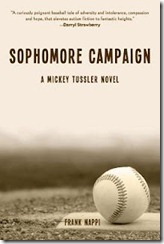 It s 1949 and eighteen-year-old pitching phenom Mickey Tussler is back with the rejuvenated minor league Brewers in the sequel to The Legend of Mickey Tussler (the basis for the television movie A Milein His Shoes). Despite Mickey s proclamation that he will never play baseball again after last seasons violent conclusion, his manager and now surrogate father Arthur Murphy cajoles the emotionally fragile, socially awkward boy with autism into giving it another shot. Mickey reluctantly returns to the field and must once again cope with the violence and hatred around him. When a young African American player joins the team, the entire team is subjected to racial threats and episodes of violence, one of which Mickey witnesses first hand. Struggling to understand such ugliness and hatred, and fearful of reprisal should he tell anyone about what he has seen, the boy s performance on the field suffers.Mickey now must deal with a side of human nature he scarcely comprehends.

Sophomore Campaign can be purchased on Amazon, here