Hey Guys!
So today I am introducing you to the lovely Anne M. Strick, author of All the Doors to Hollywood and How to Open Them. I will be asking her some questions for you all to read over and enjoy!
Hope it helps you get a better insight into her and her novel!

Hello Anne, and welcome to A Daydreamer’s Thoughts! Starting off easy, tell us a little bit about yourself, anything you would like your readers to know.
My family background and early history are a touch theatrical.  One of my uncles was a theater  and film director and his wife, my aunt Gale Sondergaard, received the Academy’s created-just- for-her Best  Supporting Actress Award for her work in the movie ANTHONY ADVERSE . I myself, at the age of thirteen, won a scholarship to a children’s acting school and studied for three years.  My husband, Joseph Strick, was a film producer and director, for whom I intermittently worked.  So it’s not surprising that I ended up, for rather a long time, in the movie business.  And wrote two books about it:  ALL THE DOORS TO HOLLYWOOD AND HOW TO  OPEN THEM, and the steamy rival to  SHADES OF GRAY, THE REBEL PRINCESS.

Fair enough! When you’re not typing away at the keyboard coming up with new ideas, what do you do?
I read, mostly, and see movies, and play with friends.

So now we know more about you, what about your book? What is it all about?
My book, ALL THE DOORS TO HOLLYWOOD AND HOW TO OPEN THEM, is a first-ever career guide to largely unknown, high-paying jobs in film and television. The book comprises a series of interviews with those behind-the-screen wizards who make movie magic actually happen.  They tell what they do (what is a grip? A gaffer? A scenic artist?)  how they do it,  how they got their first jobs, and some adventures they’ve had.  The book includes a chart of all the Hollywood guilds and locals,  with phone numbers, e-mail addressers and websites, for follow-up job information.  It’s a uniquely practical careers handbook.

I wanted to make Hollywood dreams, and the rich, fascinating behind-the-screen Hollywood world, known by, and accessible to, all of us.

As someone who has worked in the film industry for over twenty years, do you have a great (or inspiring) story to tell us quickly?
I think my most significant (if not precisely inspiring’) moment

was when I got hired, on my third job interview, for the first time by someone other than my husband.  I immediately became a Unit Publicist on the movie THE BORDER, with Jack Nicholson,  to be filmed in El Paso, Texas.  I was both terrified and thrilled.  But it began not only a whole new career, but a great new field of things to write  about.

For you personally, what role within the film industry do you like the most?
If I dad my druthers, I‘d like to be the studio honcho who greenlights really interesting films.

Do you have a favourite screenwriter?
I loved Dalton Trumbo (ROMAN HOLLIDDAY) a number of years ago.  And I like Robin Swicotd (MEMOIRS OF A GEISHA)  today.

What quick advice can you give to aspiring film makers or those who just want to get into the world of film?
If you want to get into the film business – large screen or small – forgive me for tooting my own horn, but ALL THE DOORS really is a terrific and unique  guide to many, many exciting and  largely unknown behind-the –screen  careers. The people interviewed in my book love their work – the travel,  the endless variety, the intriguing people they get to know, the creativity and fun and adventure  -as well as first-rate financial rewards -of the job. And they tell you how they did it.

and a quick fire round;

ebooks or hard copies?
I enjoy both ebooks and hard  ccopies.

day or night?
I  like day for  work and exercise, and night for reading and play.

reading or writing?
I like writing for work and reading  for relaxation.  Gotta have both!

watching or filming?
I love both watching and filming – particularly the getting-paid part of filming.

paper or computer?
I can’t manage without my computer, but I print out endlessly.

tea or coffee?
Coffee in the morning, and tea in the afternoon.

favourite film of the moment?
I keep enjoying THE PATRIOT and BRAVEHEART .   On the other hand, CONAN THE BARBARIAN , on which I worked, remains a hoot. And I was enchanted by Woody Allen’s MIDNIGHT IN PARIS.

Thank you for talking with me today Anne, it’s been a pleasure to learn more about you and your book! 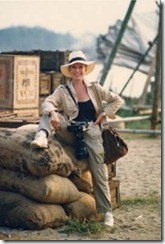 Anne M.Strick has spent over twenty years in the movie industry. She has worked for Universal, Warners, Paramount and EMI, as a Unit Publicist, Project Coordinator and National Publicity Director, and with such Hollywood legends as Jack Nicholson, James Earl Jones, Sean Penn, Arnold Schwarzenegger, David Lynch and Dino De Laurentiis, among many others.

She has been a Congressional speech writer, published articles, theater reviews, short stories, two non-fiction books (one an international best-seller), two novels, and the highly praised (“remarkable”) critique of our adversary legal system, Injustice For All. Born in Philadelphia, educated at Bennington College and UCLA, she lives in Los Angeles.

Behind the Blog #9 - Stormy Times Ahead