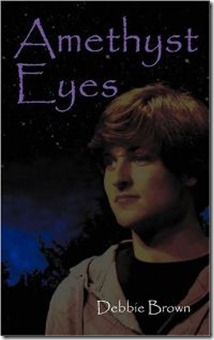 The biggest thing on 15-year-old Tommy’s mind is convincing Mom to let him go to the drive-in, but when an accident claims his mother’s life and puts him in the hospital, the arrival of his estranged, alien father brings more changes than he had bargained for.It doesn’t take his father long to figure out that Tommy knows nothing about who or what he is. Without any explanation, Tommy finds himself onboard his father’s spaceship where he is forced to trust a man he does not know in a world he knows even less about. Adapting to his new life seems overwhelming, and his father’s solution may prove to be Tommy’s finest challenge yet…Jayden. A few months younger than Tommy, high strung and always in a mood, the doctor’s daughter definitely didn’t like being ‘told’ to help Tommy fit in. Jayden is not the most welcoming or patient of tutors, let alone a friend.As fate would have it, Tommy quickly learns that none of these things compare to the peril that comes from being born with amethyst eyes.

I feel that the first thing I need to say before I start this review is that I never used to like Sci-Fi. In fact, I avoided it completely, certain that it was not a genre I was going to like. The problem being that my view of Sci-Fi was that it was all like Star Wars, Star Trek, or Battleship Gallatica; shows that really did not appeal to me at all. Then, I realised that avoiding an entire genre based on a few shows/films was a silly thing to do and since then I have realised that while I’m still not a lover of sci-fi shows and movies, I am finding some absolute gems in the book department. And that is what brings me to Amethyst Eyes. This was a book that I really enjoyed reading. It was inventive and imaginative and was a real treasure that I think everyone should go and read when they get the chance!

So, you’re now probably sitting there after reading that and wondering; but why three stars? Should I explain my rating system to you? Maybe. I do not like half stars. I find them irritating, a sort-of scapegoat to the five star system, if you will. You might as well be grading it out of ten if you’re going to use half stars. With that said, this book was truly difficult to pick a rating for. At times I raced through the words, making me know I was ready to give it four stars and then at other times I felt that it really should be a three star. In the end, because I couldn’t quite come to a decision and was in that middle “grey” area, I have decided to give it three stars.

I’ve already said this, but I feel it needs reciprocating. I loved the inventiveness of this novel. Debbie has really dove into her imagination on this one and bought to life a new world, one full of bizarre technology and frightening dangers unheard of here on Earth. It was such a unique galaxy and space and I just really loved reading about it and hearing more about it. I found myself wanting to know more about the world, wanting my own questions about the world answered instead of Tommy’s. It was magnificent and is, I am starting to realise, one of the best things about sci-fi novels. The creative worlds that authors imagine is just, dazzling and inspirational. And I was certainly inspired.

The characters in this story were really interesting too. I liked Tommy, while at the same time I disliked him. It was hard to get where his head was at because, well, let’s face the facts, I’m not a fifteen year old boy, but I feel that the fact I couldn’t always understand his decision or his thoughts just showed how well Debbie was able to write his character. I really liked Jayden, especially when you really got to know her and she came out of her shell. She was a great character to root for and I certainly found myself rooting for her! Tommy’s dad was really well placed as well, he was the Colonel, he had to be distant but at the same time he was a dad and he wanted to be protective and care for his son and the switch between his two roles was often admiring. I liked how he took control whenever he had to but that, at the same time, he was willing to lose it when it was necessary. He was a great character to get to know.

This story was not short on action. From the very first chapter, the reader is thrown into the action of it all and while it does stop, there is always something else just waiting around the corner. These action scenes were also well written. They weren’t confusing so you didn’t know what was going on but were well thought out and described everything in just enough detail. Some of the non-action scenes did seem to go on for a bit, it was at these parts that my rating of the book slipped but I also know that these were necessary scenes for the novel to work, it was the background that needed to be explained for other parts of the story to work as well.

Along with the action, the plot of this story was really interesting. I liked witnessing the journey that Tommy took, but also that of Jayden and his father. I was intrigued with how things happened and I really wanted to know what would happen next. It was interesting to witness how it was all connected and worked together and I just loved reading through it all. I especially loved the ending. I loved how it all came together, how the changes all the characters went through affected them and how they acted in this final scene and how it has essentially set the scene for the next ‘chapter’ – so to speak. The ending truly grabbed at me and made me want to read more and I am certainly waiting on tender hooks to see if another book will be written. In a way, the ending is ambiguous, it could be left where it is but this reader hopes that there is more on the way.

This book is one that is easy to read, it is fun and interesting and creative. It is action-packed and really grabs a hold of the reader. It has a really brilliant storyline and the ending really packs quite the punch. It is not a complicated read and is definitely something that everyone should consider picking up and giving a go. It deserves all the love it can get and I hope that it gets it! I would recommend this to younger readers (aged 15-18), readers who love sci-fi and adventure and to anyone who just wants a light but imaginative and fun read that will hook them in and make them wish for more.

Before I read and wrote this review, I had the pleasure of interviewing Debbie Brown and if you missed it, you can find that review, here.

** I received this book in return for an honest review **