Search
Hi Guys!
Today I’m excited to introduce you guys to the lovely Laura Elliot. I’ve got a really interesting interview with her to share with you all, but first, here’s some info about her newest release, Fragile Lies. 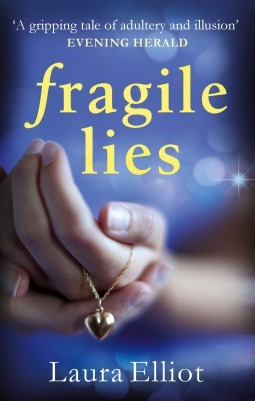 His name is Michael Carmody.
He is a writer and a father.
His son is lying in a coma, fighting for his life.

Her name is Lorraine Cheevers.
She is an artist and mother.
An illicit affair has destroyed her marriage.

Michael is desperate to find the couple who left his son for dead, a victim of a hit and run.

Lorraine is desperate to start a new life for her and her daughter.

Michael and Lorraine are about to cross paths – damaged souls, drawn to one another.

They don’t know that their lives are already connected.

They don’t know the web of lies surrounding them.

They are each searching for the truth. But when they find it, it could destroy them both.

If you had to describe your book in a tweet (140characters), what would you say?
Fragile Lies is about an affair that spins into a web of deception – and how that web affects two strangers in a dangerous search for the truth.

Was there a specific moment of inspiration for Fragile Lies or was it more out of the blue?
I was driving home one night when I looked across Dublin Bay towards an industrialised site on the docklands. It was lit radiantly against the dark sky but I knew it was a bleak, lonely place. Some years previously when I worked as a journalist I’d conducted an interview in that location with some homeless people. When I finished the interview I noticed two cars parked together –but only one car was occupied. I thought, as I drove away, that the couple in the second car must be having a secret liaison. What else would bring them to such an isolated setting? That memory came back to me as I looked across the bay – and the catalyst for Fragile Lies was born in that instant.

What was your favourite thing about writing Fragile Lies?
The element of deception – of taking the reader, as well as the characters through layers of deception towards the truth.

Who was your favourite character to write about in Fragile Lies?
Lorraine. I liked the idea of her starting over again.

How many drafts did it take to write Fragile Lies?
About five or six. When I started the book the victim of the hit and run accident was an old homeless man. In my initial draft he died as a result of the accident. I worked with that idea for a few months but the story refused to come to life. Then I realised that I’d created the wrong victim. An old man, alcoholic, homeless, no family ― his death could slide all too easily from everyone’s mind. The dynamic of my story changed as soon as I decided that the victim should be a young man and that he should survive in a coma as a result of the accident. Suddenly, I had his parents as characters, an on-going situation at the hospital, and a media story that kept moving the plot forward.

If someone wanted to read a book after Fragile Lies that was similar, what book would you recommend?
If you mean my own books ―I’d say Stolen Child is most similar to Fragile Lies. It has that same element of psychological drama and relationships that develop as a result of dangerous circumstances. In terms of other books it’s harder to compare but Before I Go to Sleep by S J Watson has the same theme of deception and memory loss.

Where is your favourite place to write?
I have a room in my house which I use as my office. I do most of my work there and have a very disciplined routine. I live beside an estuary and I often take a pen and paper with me when I’m walking along the shore – there’s a favourite spot where I can sit for a while and take notes. My garden on a summer’s day is another pleasure – but that’s mainly to handwrite rough outlines.

You have a large backlist of other titles you’ve written, including non-fic and YA, what is your favourite writing style?
My adult novels are the most challenging and the books where my own writing style is most apparent. I’ve often tried experimenting with other styles ―particularly when I’ve read something by an author whom I admire―but it’s almost like trying to rewrite my DNA. Iinevitably, after a few failed experiments, I revert to my own style.

Are you someone who plans all of your books meticulously or are you more of a “pantser”?
I usually have to submit a synopsis to my publisher so that gives a very short and concise outline of my new book. When I’m writing this synopsis I’ve absolutely no idea how I will bring the various
elements of my plot to completion. One half of me is screaming…no…no…it won’t work …while the other half―the half who believes that there is a mysterious internal force at work and the story is already in my psyche waiting to be unpicked―is soothingly whispering…yes…yes…you can do it. I usually succeed but, occasionally a book can go off-course and then I have to decide to either run with it or whip my characters back into behaving themselves.

From your bio, I see that you give regular creative writing workshops. What piece of advice do you give most often to aspiring authors?
My workshops are usually geared for writers interested in writing their first novel. My advice is to roughly handwrite your initial idea. Don’t waste time on writing the perfect opening paragraph. That opening will probably change as your book develops. Don’t worry about your writing style at this initial stage. The main aim is to capture the energy of your idea and pin it down on paper. To handwrite is not essential – if you are a whiz on the keyboard then work directly onto the computer. But I find the computer allows too much time for reflection, for copy and pasting―whereas the flow of the pen keeps pace with the flow of imagination.

Once that draft is down the real work on the computer begins. A lot of what has been written in that initial rush will have to go. What stays will need to be explored and developed, characters will
acquire flesh and personalities, dialogue will become informative yet natural.

Beware of the paragraph that makes you proud of your writing skills but clogs, rather than adds to the narrative. It’s hard to let go of something you admire but be ruthless, copy and caption it and, perhaps, you can insert that paragraph at a later stage when it will have more relevance.

At a certain point, when you feel that the draft you’re working on needs a radical overhaul, make a copy of it and work on a new copy – each copy should be dated. It’s easier to cut and make significant changes if you know that your original copy is intact – and can be used again if the new changes don’t work out.

When the novel is finished let it mellow for a few weeks then read it again before submitting it to a publisher. You may discover mistakes you didn’t notice earlier or realise that certain elements in the story need strengthening.

Be brave, be confident and believe in your ability to become an accomplished writer. But, also, be aware that that accomplishment is hard earned through constant rewriting and striving to improve.

What a lovely interview! Thank you very much for chatting with me Laura. I very much look forward to reading Fragile Lies.