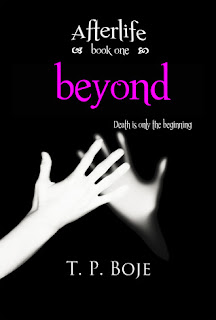 Have you ever wondered where you go when you die?
Meghan is 16 when it happens to her.
She wakes up on a flying steamboat on her way to a school run by Angels in a white marble castle.
It is a school everybody has to go to before they are let into Heaven.
On the boat she meets Mick who has been dead for more than a hundred years but still looks like a teenager. He helps her past the difficult beginning at the new school in a new world.
One day some of Meghan’s roommates find a mirror in the cellar of the school and they persuade her to go through it with them – well knowing it is strictly against the rules of the school. Meghan ends up back on earth where she meets Jason. But Jason is in danger and Meghan know something important. Something that is a matter of life and death. Soon she is forced to choose between the two worlds. The one she belongs to now and the one she left.

FOUR OUT OF FIVE STARS ****
Beyond: The Academy is one book that I simply enjoyed thoroughly. It was a nice, easy read where I was fully able to just forget about everything and simply read a story that really interested me and kept me wanting to turn page after page. While there were some issues that I had with the story, all in all, this was a novel that I would happily read again, one that I would recommend to others, and one that has me sitting on abated breath for the next instalment. Therefore, it simply makes sense that this novel deserves four stars from me because it is just such a good read.
I loved the concept behind this story. It should be known now that ghost stories always touch a soft spot in my heart. I absolutely adore them and I am so glad that this book was no exception. I love the idea of a ghost academy where one goes to learn about how to be a spirit properly, learn how to control yourself and how to fend yourself against the evil spirits that lurk around the corner just waiting to enter your mind. I also implore the idea that the spirits can affect the humans thoughts and actions, I found this to be such an intriguing and though provoking part of the story.
Another aspect of the story that I adored was the love story. I am always usually a bit iffy when it comes to love in a novel, or rather, I’m picky. However, I liked the way that it played out in this novel. I really liked Jason, especially the way he acts the first time that he is introduced. From then on, I knew that this was a character I was going to enjoy reading about. I like that the love wasn’t too pushed or forward and I like how she didn’t think it was a good idea to fall for him and yet just couldn’t help it. It felt more natural than the other relationship that tried to happen in the book but failed. That is probably why I am more excited to see how it will turn out for Jason and Meghan.
It is this lack of unnatural friendships with in the book that is one of the problems I found with it. Unfortunately, the characters, for me at least, just weren’t fleshed out enough and it was impossible to see how the relationships therefore worked between them. I found myself asking too many questions as I read, such as why was Meghan suddenly friends with so-and-so? When did they become so close, did I skip something? While this did detract from the story slightly, it did not stop me from reading and it was easy to just push it aside to see the other relationship with Jason develop and to witness how everything else went down. It is unfortunate but for me, it is only a small issue that is easily resolved by just continuing to read and enjoying everything else the book has to offer.
The only other problem I felt with the book was the lack of description in some places and sometimes it would feel a little inconsistent. It was often difficult to really see how they got from place to place, and it was told that they couldn’t hold things but they would sit and eat, and open doors, etc, but it was never really explained how this was possible if they hadn’t learnt how to fully feel objects fully. It was slightly distracting but once you realised that it was never going to be explained, it was easier to just sort of go with it. This was the main reason this story didn’t get five stars and it very nearly made me change it to a three star review before I realised that, actually, I really liked the story and while there were inconsistencies, the plot helped to just push these things aside.
I really liked how this story ended, and the message that it was getting across that everything we do has consequences, even the things we think we’re doing out of kindness. I loved the little twist at the end and can honestly say that I cannot wait to read and find out how that is going to turn out! This ending was another reason this story was rated so highly with me, it was just so rich and full of emotion and something that I just wasn’t expecting at all.
All in all, this was a novel that I just really enjoyed. It had some issues but these never fully detracted from the great story that was unfolding before my eyes. It is a book that I am extremely happy to have read and one that I would happily read again as well. I received this book as part of the read 2 review scheme on the Paranormal Romance and Urban Fantasy Fanatics goodreads group and boy am I glad that I did!
Faye

The Stubborn Dead by Natasha Hoar