Ghost Target by Will Jordan

Hi Guys!
I’m here today on the Ghost Target blog tour and I’m here to introduce you all to Will Jordan as he talks about his Bookish Inspirations!

First though, here’s some information on the book! 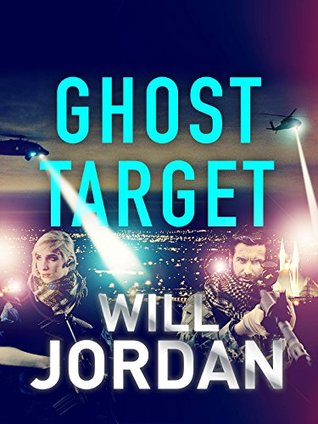 From Marseille to Islamabad at breakneck pace… it’s kill or be killed for Ryan Drake and his team
Ryan Drake, once a decorated field operative, is now wanted for treason. On the run from the CIA’s corrupt Deputy Director Marcus Cain, he has spent the past six months in a remote French safehouse. Drake’s former life seems to be behind him, but the uneasy peace is shattered when Cain moves against him with startling force.

Meanwhile, the war in Afghanistan is faltering in the wake of a devastating suicide attack. Cain though has a plan to find and destroy al-Qaeda’s top commanders. And nobody will stand in his way.

Backed into a corner, Drake turns to the deadly but unpredictable Anya – once Cain’s most promising agent, now his most bitter enemy. With tensions running high and their uneasy alliance threatening to tear itself apart, Drake’s hastily assembled team travels to Pakistan to intercept Cain.

With the fate of the War on Terror hanging in the balance, loyalties are tested and scores settled, as Drake embarks on the fight of his life. Only one side will survive…

Wow, where to begin? It’s fair to say that I don’t read an awful lot when I’m working on another book in my Ryan Drake series. In fact, it would be fair to say I actively avoid reading. Why? Well, partly because I have little enough time to get my own books done, never mind trying to tackle other people’s. But I suppose the main reason is because I want to keep my mind clear and focussed on the story I’m trying to tell. I don’t want to be thinking about other author’s characters, other book’s plot twists or rousing finales. I find it best to give my own stories room to develop as they need to.

That being said, I have and sometimes still do use other books to inspire me, to motivate me, or just to give me a different way of looking at things, so hopefully the list below reflects that blend of old and new.

1. The Clan of the Cave Bear (Jean Auel)

Having stumbled on it twenty years ago by pure fluke, Auel’s Earth’s Children series will always have a special place in my heart, because it’s basically the reason I got into writing in the first place, and it all began with Clan of the Cave Bear. Set during the last ice age at the dawn of human history, the book follows Ayla, a young girl who loses her family in an earthquake and is taken in by a clan of Neandertals. Forced to adapt to a shockingly different way of life, and to survive against the vindictive future leader of the group, it’s impossible not to root for her. The book makes no effort to romanticise that era, depicting life as hard, dangerous and unforgiving, which makes Ayla’s story all the more remarkable. I learned a great deal about character building from this book; so much so that one of my own characters in the Drake series is actually a tip of the hat to Auel’s classic protagonist.

One of the earliest books I remember reading independently, Conrad’s War is told from the point of view of a young man growing up in the 1960’s who fantasises about WW2. Gradually his fantasies begin to seep into the real world, taking on a life of their own. Accompanied by his hapless dad, Conrad experiences everything from piloting a defective aircraft during a bombing raid, to an escape from a POW camp, to a desperate race for the French coast. It’s told with a wonderful sense of dry humour, particularly his relationship with his blundering father, but the most arresting moments are the serious ones, like when Conrad encounters a decrepit ambulance loaded with casualties and begins to realise war isn’t the glorious adventure he imagined.

If ever I learned a lesson from a book, it was this – it doesn’t matter what the situation is, how mundane or simple it might seem; if you care about the characters involved, then it becomes the most important thing in all the world. I learned that lesson from A Thousand Splendid Suns; the story of two women living through two turbulent decades of Afghan history, and their increasingly desperate attempts to escape their abusive husband. An absolutely gripping look at the enduring power of friendship, hope and sacrifice.

Taking my cues from this book, I’ve made a point of crafting compelling, relatable characters that my readers can genuinely empathise with and become attached to. That way they can be even more shocked as I start killing them off!

As bleak and uncompromising as it is heartening and uplifting, The Road depicts the struggle of a father to survive and protect his son from the dangers of a post-apocalyptic world. More importantly, the book examines what it truly means to be human, and how far one can go in order to stay alive. The book’s central message took on new meaning for me when I became a father myself.

Well it doesn’t all have to be bleak and grim! Even a writer needs a bit of escapism from time to time, and truly there’s nothing better for me than to take off on another adventure with Cussler’s unflappable hero Dirk Pitt. Globe-trotting escapades, beautiful and exotic locations, over the top villains and ancient mysteries combine into a perfect blend of action and intrigue. Even if we work in somewhat different genres, I can’t help but add a pinch of Cussler’s style every once in a while, particularly by having Drake and company travel to far flung countries for their next mission.

I make a point of taking a Cussler book with me every time I go away on holiday. I dread the day when I finish them all!

6. My own online writing

It may sound self indulgent, but stick with me. Writing is like a snapshot of your life at a particular place and time, way more personal than a photograph because the words were crafted and developed entirely by you. For me there’s no easier way to evoke memories of a certain time in my life than to read something I wrote back then, and fortunately there’s a pretty big repository of my old work lurking out there in cyberspace to this day. And no, I’m not telling you where it is!

But it’s rather satisfying to be able to bring back some of the characters I created back then and work them into my present day Drake novels.

7. The Lord of the Rings (JRR Tolkien)

Really doesn’t need an introduction, does it? Lord of the Rings is one of those books that simply is. Grand and sweeping in its scope, rich in its detail and backstory, yet somehow able to marry this to the most intimate and poignant character moments, it’s simply a masterclass in storytelling. It helped introduce me to fantasy as a genre, and actually taught me some important lessons about developing large scale, epic storylines across multiple volumes. Again, lessons I’ve been able to apply readily to the Ryan Drake series.

The only book to ever make me cry. The story of an orphaned girl struggling to survive in wartime Nazi Germany, told with remarkable sensitivity and poignancy from the point of view of Death himself. The bleak setting only serves to highlight the tremendous humanity and warmth of the book’s characters, particularly the main character’s adopted father. The ending, when it comes, still gives me chills whenever I think about it.

Never have I read a book so wonderfully open to interpretation. In a world where the very fabric of reality can be twisted and distorted by the sinister Party, there’s no way to truly be sure of anything the book throws at you. With a protagonist who is neither heroic nor noble, but utterly frail and human, this book still manages to evoke the same feelings of creeping dread and paranoia with every read.

A novel I was introduced to back in high school, and one that has stayed with me ever since. Haunting and dreamlike in its telling, but brutal and savage in its concept, it depicts the last days of a group of Neandertals as they encounter and are ultimately destroyed by the newer and more advanced invading species – humans. The air of sadness and melancholy that permeates the book is almost palpable, and even if you know the fate that awaits the main characters, you can’t help but hope they’ll somehow make it through.

Anyone who’s read my latest novel Ghost Target can no doubt sympathise!

Will Jordan was born in Fife. Whilst completing his degree in IT he worked as an extra in television and feature films. Cast in several action films, he was put through military boot camp and weapons training in preparation. He used this experience as the basis for his first thriller, Redemption and followed up with visits to weapon ranges in America and Eastern Europe, as well as research trips to Washington DC, London and New York. He has also interviewed British armed forces who had served tours in Afghanistan Ghost Target is his sixth book in the Ryan Drake series.

Are you as intrigued as I am?

Harry Potter and the Cursed Child