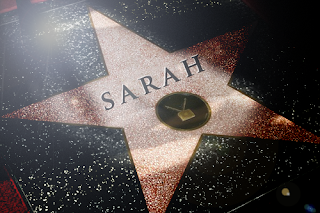 As you should all know, Sarah, is my Blogger Spotlight this month.
Throughout the month I said I would do a few things for her.
So far;
I introduced her
I linked to one of her blogspiration posts
I interviewed her
and today I am giving you guys some Insiders Scoop about her.
The best thing about this post? She has no idea that I’m doing it. When I say insiders, I really do mean it! :D
Sarah is possibly one of the best bloggers I know. She is so amazing, fun, lively and energetic. She is caring and spam-freaking-tastic.
If you don’t believe me, go read her interview! (Like, right now.)
But what I really love about Sarah is her love for everything film.
She tells me that she is glad for me because I ignited her love for film again, but what she doesn’t realise is that in her own way, she ignited my love for film as well, especially talking and posting about film!
So, rather sneakily (but maybe not, Sarah, did you realise why I asked?), I managed to get the juice out of Sarah. She told me what her favourite films were.
Initially I asked for her top ten but it appears that she couldn’t dwindle it down to that few.
So, without further ado, these are the films that Sarah holds above all others!
*in no particular order
Amelie
Pans Labyrinth
Eternal Sunshine of the Spotless Mind
Scott Pilgrim
The Matrix
The Princess Bride
Evil Dead 3: The Army of Darkness
Harry Potter (Series)
Shaun of the Dead
Anchorman
Zoolander**
Coraline**
Stardust**
Nightmare Before Christmas**
Labyrinth**
Monty Python Movies**
Spirited Away****
Groundhog Day
** are additions
**** is an anime addition
bold is one final addition (promise)
So, there you have it! Sarah’s top 18 films.
She also admitted to quoting Harry Potter and Anchorman the most.
She also said that choosing her favourites was like “choosing favourite children”
These are the movies that she can watch over, and over, and over, and over, and over again.
So, after reading all of that, is there a reason you’re still NOT following this amazing girl? No? GOOD.
Faye

My Thoughts On… The Intruder

All We Could Have Been by T. E. Carter