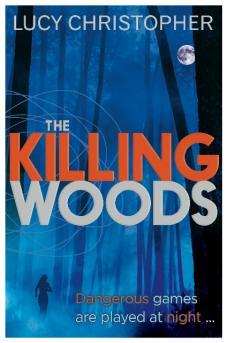 Summary:
Emily’s dad is accused of murdering a teenage girl. Emily is sure he is innocent, but what happened that night in the woods behind their house where she used to play as a child? Determined to find out, she seeks out Damon Hillary the enigmatic boyfriend of the murdered girl. He also knows these woods. Maybe they could help each other. But he’s got secrets of his own about games that are played in the dark.

Lucy Christopher is an author that I haven’t read before so when I started reading this book I went in without many expectations. I had heard that the book was incredible from other bloggers who had already read it, but aside from that I had no idea what to expect. In that respect, I think that made this book incredibly enjoyable. I was fully immersed into the words on the page and found it difficult to put the book down and continue on with the rest of my life. I read it really quickly and am just incredibly glad that I was given the opportunity to do so. I would definitely recommend this book to others, especially if you love mysterious crime novels.

From the very beginning I was pulled into this book and I was instantly wondering what had actually happened. I felt like I knew it wasn’t her dad and I was certain I knew who did do it (I did!) but I just couldn’t work out what had happened. I feel like the plot of this was really well plotted out. You’re given just enough information to keep you going and wanting to know so much more. Lucy really managed to use the characters to drive the narrative and I really enjoyed that about this book. I wasn’t a huge fan of the odd reveal in the middle of the book, but it is something that I can see someone people doing but it was just odd. Felt a little bit like some bizarre episodes of CSI. But I still enjoyed the book despite all of that.

As mentioned above, the characters in this book really drove the narrative and I really liked how Lucy managed to really bring their emotions to the forefront. This book felt rich and raw with emotions from the actions and reactions of the people in the village. I wanted to hurt a lot of the people for the way they were treating the main protagonist but I could also see it happening in real life (which is just upsetting). Emily is a strong character who is determind to prove that her dad didn’t murder the girl but as the book carries on and things start cropping up, you can see her really come into her character and I think it was incredible. She had all the flaws you like to see in protagonists to help make them feel real. I was conflicted when it came to Damon. I wasn’t sure I particularly liked him. There were times when I thought he was okay but overall I think he just irritated me. I can’t really pinpoint why that was but he just didn’t seem like the kind of guy I could get along with. I feel that the person he was by the end of the book, however, is someone I could get along with and like more.

As this was the first time I had read one of Lucy Christopher’s novel, I had no idea what to expect from her writing and I was pleasantly surprised by her style. I found it to be incredibly easy to read and she had a way of making me really able to picture what was happening while still keeping the action and emotions flowing well. I am certain that I will now be going out and reading more books by Lucy to see if her style is just as enjoyable elsewhere. Another thing to mention was that I feel the setting for this book was really well thought-out as it is very likely this wouldn’t have worked anywhere else. It was a place where everyone knew everyone and that just made the book feel more intimate, mysterious, and heavy on the emotions. I really enjoyed that about it.

Overall, this was a book that I sped-read through. I struggled to put it down because this was a book that just captivated my attention and wouldn’t take it away again. It was mysterious, full of action, full of emotions, and just incredibly intense and intriguing. I really enjoyed reading this book and would easily recommend it to other people. If you’re looking for a crime book that is a little bit unique, feels incredibly real and just captures you, then you should definitely pick up this book. If you’re someone who doesn’t often read crime novels, I also think this is the perfect novel to ease you into the genre as it has a lot of different vines twisting throughout the book and it is really focussed more on the characters rather than the crime itself – although the crime does still play a large part! This is a book I would easily read again.

** I received this copy from the publisher in exchange for an honest review. I was not compensated nor was I required to write a positive review. **