Hi All!
Today is my stop on the Brake Failure blog tour and I’m here to tell you all about the book and a chance to win a $25 Amazon Voucher! 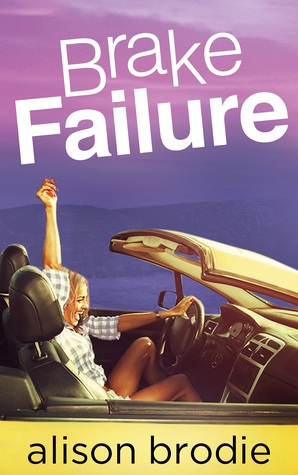 “Is it too late to tell him you love him when you’re looking down the barrel of his gun?”

Ruby Mortimer-Smyth is upper-class English, rigidly brought up to marry a man from the pages of Burke’s Peerage. She knows the etiquette for every occasion and her soufflés NEVER collapse.

She is in control of her life, tightly in control. Until …she ends up in Kansas.

Ruby believes that life is like a car; common-sense keeps it on the road, passion sends it into a ditch. What she doesn’t know is, she’s on a collision course with Sheriff Hank Gephart.

Sheriff Hank Gephart can judge a person. Miss Mortimer-Smyth might act like the Duchess of England, but just under the surface there’s something bubbling, ready to erupt. She’s reckless, and she’s heading for brake failure. And he’s not thinking about her car.

With the Millennium approaching, Ruby gets caught up in the Y2K hysteria. She joins a Survivalists group, who give her a gun and advise her to stockpile basic essentials. Accordingly, she bulk-buys Perrier, Gentleman’s Relish and macaroons.

Ruby, far from home, is making Unsuitable Friends and “finding herself” for the first time. She falls in with a gang of Hells Angels and falls foul of the law. At every turn, she comes up hard against Sheriff Hank Gephart, whose blue eyes seem to look deep into her soul. She desperately wants him, but knows she can never have him.

She’s angry at the emotions he arouses in her. Pushed to her limit, she bursts from her emotional straightjacket.

As the clock strikes midnight of the new Millennium, she’s on a freight train with three million dollars, a bottle of Wild Turkey and a smoking gun.

What happened to Miss Prim-and-Proper? And why did she shoot Mr Right?

Alison Brodie is a Scot, with French Huguenot ancesto
rs on her mother’s side. Alison was a photographic model for a wide range of products, such as Ducatti motorbikes and 7Up. She was also the vampire in the Schweppes commercial.

A disastrous modelling assignment in the Scottish Highlands gave Alison an idea for her first romance novel, Face to Face. It was taken up by Dinah Wiener, the first agent Alison sent it to. Three weeks later, Alison signed a two-book deal with Hodder & Stoughton. Subsequently, Face to Face was published in English, German and Dutch. “Vain, but wildly funny leading lady.” -Scottish Daily Mail. It was also chosen as Good Housekeeping’s “Pick of the Paperbacks.”

Unfortunately, Alison then suffered from Second-Book Syndrome. The publisher’s deadline loomed but Alison couldn’t think of a story! She found the whole experience a nightmare; and this is why she cautions first-time authors not to sign a multi-book deal unless they are prepared!
Alison lived in Kansas for two years. She loved the people, their friendliness, the history and the BBQs! Now, she lives in Biarritz, France with her rescue mutt, Bayley.

Alison’s previous release, THE DOUBLE, was published to rave reviews:

The Dry by Jane Harper