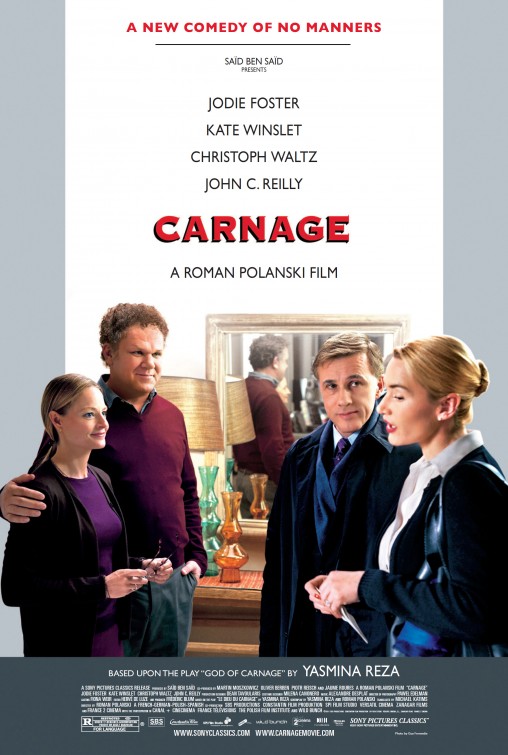 Summary: Two pairs of parents hold a cordial meeting after their sons are involved in a fight, though as their time together progresses, increasingly childish behavior throws the evening into chaos.

This film was one that made me leave the cinema with a smile on my face and questions racking about in my head. Simply put, it was a wonderful film that truly captured me and left me feeling good and happy (yet maybe slightly cynical of adult behaviour).

Kid one has hit kid two with a stick in the playground and their parents have come together to discuss it. What starts out as a polite and formal way of dealing with the matter, quickly transcends into something altogether more deeply disturbing. It is quickly shown that both couples, (as well as every individual), has issues and these are thrust into the middle of this somewhat hostile yet also peaceful environment.

The interactions between the characters felt natural, in the sense that you could see their uncomfortable feelings and behaviour while being able to relate to it and understand it. Soon these interactions provided full-on entertainment for the audience as they watched things within the room steadily go from bad to worse. It is probably a common thought among viewers, “thank god that’s not me,” while also hoping that if they were ever put in such a horrid predicament that they would act with a lot more dignity. Of course, the whole idea behind the film is that in reality, they probably wouldn’t.

Adapted from a play, it is easily noticeable how character-centric this film is. Set in only one location and with nothing but each other to act and react around, this film could have quite easily fallen flat on its face but, thankfully, this was not the case. The style of the film actually made it more interesting, it pulled you in closer to the film and helped to make it a more riveting experience. It isn’t often, after all, that films use only one apartment as a location for an hour and a half long film. But it uses this technique with style and I would certainly be interested to view more films like this. Then again, I have always enjoyed the theatre…

The actors of this film are truly inspirational and have really managed to capture the strong characteristics of their characters. They help to make the film seem more realistic and believable while managing to fill the screen with the uncomfortable atmosphere that stays throughout the film. It is this atmosphere that keeps the audience laughing throughout the film and just really manages to make it entertaining. Roman Polanski is known for strong character films and this film is definitely no exception to that and it is true to state that he is quickly becoming a director that I will be keeping an eye on.

This is definitely a film that makes you think, it gives you an insight into human behaviours and the irony of the things that we fight for and against. It also provides a distinct and unique view into the behaviours of adults and I just found it to be a truly compelling film that I really enjoyed watching. It is one that I would definitely be happy to watch again and again and one that I would recommend to anyone who wants a bit of entertainment and an hour and a bit of some fun, light but also heavy, film watching.

A truly spectacular and unique film that really hits the right spot.

The Summer My Life Began by Shannon Greenland