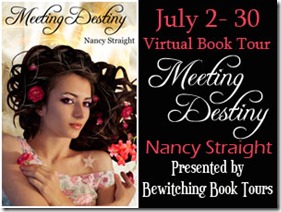 Hey Guys!
So today I am introducing you to the talented Nancy Straight, author of the Destiny Series.
She has written you all a wonderful guest post on the catalyst for the series. This was supposed to be posted on Tuesday but due to human error, it is being posted now. (Major apologies to Bewitching Tours and Nancy Straight)
You may also remember that I reviewed Meeting Destiny the first book in the series, but if you haven’t read it yet, head over here now.

The Destiny Series is a trilogy: Meeting Destiny, Destiny’s Revenge and Destiny’s Wrath. The idea came to me when some friends and I were talking about how some people are just meant to be together. Maybe they kept running into the same person at different times in their lives, each time it wasn’t the right time for them to be together. Fate continued to bring them together until it was the right time. Another couple I knew seemed to be a matched set, their personalities were opposite but when they were together you couldn’t help but have a twinge of jealousy that –wow, they really were made for each other.

The Destiny Series takes that idea a little bit further. Not only are two people meant to be together in this lifetime; they’ve shared multiple lifetimes, each time coming a step or two closer to perfecting their souls. The Destiny Series’ journey comes off as a contemporary romance initially, where you almost have to turn your head and squint to see the paranormal aspects in Meeting Destiny. One of the supernatural characters makes a mistake and a demon with an obsession is unleashed.

Why did I write it this way? I read Paranormal Romance, Paranormal Thrillers, Urban Fantasy all the time. Watching characters thrown into impossible situations and accepting them can be hard on the reader. When I began the series, I wanted characters that everyone could relate to; going about their lives with all the insecurities and challenges we’re all faced with in our daily lives. It isn’t until midway through Meeting Destiny that the paranormal aspects reveal themselves, and even then it isn’t a shocking reveal – more like a: “Geeze, I could totally see that happening.”

The Destiny Series has so many things woven in that it’s hard to put it in a single genre. There is murder, mystery, heartbreak, love, and a new take on an old idea of past lives and soul mates. I’d love for you to give the series a try. As a means to test drive the series and see if it’s something you’d enjoy, the first book in the series is free from all major book stores as an e-book. I hope you love it! 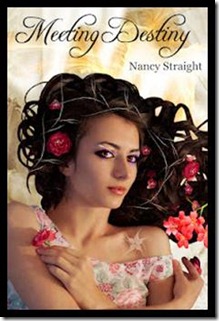 Other books in series: Book 2 Destiny’s Revenge and Book 3 Destiny’s Wrath have been released

Genre: Paranormal Romance
Number of pages: 295
Book Description:
Lauren is visited in her dreams for years by a stranger claiming to be her destiny. Destiny becomes reality when paths cross during a failed robbery attempt. Lauren and the stranger experience chemistry like no other and now her doubt over her long time relationship with her high school sweetheart is not her only secret…someone else knows about her keen intuition and sixth sense.  A mysterious clairvoyant seeks Lauren out and tells her not only of her life now but what the future may hold. Soon Lauren is in the middle of a murder investigation and a questionable friendship with the key suspect. Law enforcement, friends and family are concerned for Lauren but unfortunately they are unaware of the true danger…Sinister forces are at work and will stop at nothing to destroy Lauren’s abilities.

Available for free at Amazon, BN, and Smashwords 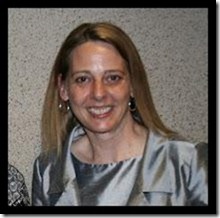 Nancy was born in Sioux City Iowa, left the cold of the Midwest in 1991 and only returns to see family in the summer time. She spent ten years traveling the world as a US Marine and settled in rural SC with her husband and two children.  She has three rotten dogs, enjoys RVing with her family, reading and writing all types of Paranormal literature.

The Beginning of the Journey; Debut YA Author Reports