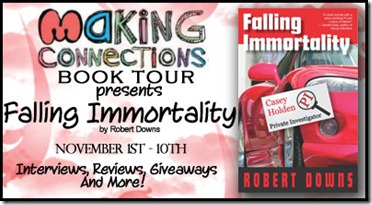 Hey Guys!
So today I am introducing you to Dragon Lady, a character in Falling Immortality.
She has written you a lovely, inspiring guest post for you all about bartending that I hope you enjoy as much as I did.
And I also have a giveaway of the book for you all too, check out the details below!

The Key to Bartending

The key to bartending is understanding people…and listening. Not the kind of listening where you smile, nod, and think about your evening ahead, but the kind of listening where you empathize, walking around in the other person’s shoes until you end up with blisters on your feet. It’s not about tips, or about a series of drinks that leaves you spinning around the bar like some brightly colored top. But it is about providing the right advice in the right quantity given at the appropriate time. It’s not on your time; it’s given at the most prudent time for the other person staring across from you, peering into the green bottle of another Heineken, as you realize he needs more help than you could ever possibly provide. But you try anyway. Not to make yourself feel better, but because you realize you might be the only tree branch between him and the edge of a steep cliff.

It lifts you up when you realize you can provide a service few others can provide. You may not grow rich pouring drinks from a tap, or yanking bottles off the shelves, or cleaning a series of glasses with a white towel in a white t-shirt, but it makes you feel complete, adding another dimension to your life that wasn’t already there, and wouldn’t be there, if you weren’t standing on your feet behind the thick mahogany of a scarred bar. Each scar has a story to tell. Maybe it was a bar fight that had gotten out of control, before you could step in the middle and talk the fists down; maybe it was a jealous boyfriend with a temper and a knife in his pocket; maybe it was a desperate gambling man who realized he had reached his last dime; or maybe it was a local lead guitarist who realized he had just played his last gig.

Maybe life is all about stories, and the best storytellers are the ones who come closest to reaching nirvana. If that’s the case, then being a good listener isn’t such a bad gig. After all, every storyteller needs a listener with an open ear, who’s not just nodding her head at the appropriate moments for the appropriate length of time. Instead of listening because you’re waiting to interject your next comment, you listen because it truly makes you happy. And if I had the choice between being happy and being wealthy, I’d choose happiness for the rest of my life, and I wouldn’t bother looking back.

Dragon Lady is a major character of Falling Immortality: Casey Holden, Private Investigator. Robert Downs is the author of said novel. A sample chapter of his MANfiction mystery debut, as well as other interesting information about the author, or Casey Holden, his main character, can be located at his website. 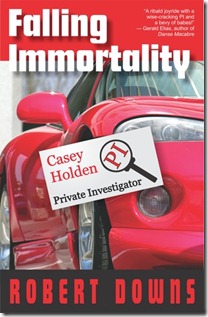 Debut, hard-boiled mystery fiction for men. Stephen King’s son describes a fitting genre as MANfiction (the opposite of Chick lit).
Casey Holden, former cop, current PI in Virginia Beach, VA, screens his clients the way he screens his women, based on whichever drop-dead gorgeous woman happens to waltz through his door first and manages to hold his attention. So when Felicity Farren, widow-at-large, struts into his office asking him to solve the two-year-old murder of her husband Artis, she intrigues him. When Casey starts digging, he learns the murder isn’t what it seems to be and he doesn’t have a big enough shovel to unearth the truth. And to top it all off, his former rival at the police department, Greg Gilman, is determined to disrupt his investigation. Casey’s challenge is to learn what really happened to Artis, and why Gilman can’t seem to remove his head from his butt. And he’ll need all of his wits to complete the task.

Giveaway!
The moment that you have all been waiting for! Your chance to win an e-copy of Falling Immortality. To enter the giveaway, you need only leave your name and e-mail in the comments below.
Following this blog is not mandatory but is always appreciated.

– Open INTERNATIONALLY
– Winners will have 72 hours to respond before a new winner is chosen.
– Winners will be notified via e-mail
– Giveaway closes on 12th November 2012
– Please read my Giveaway Policy