Today is my stop on the blog tour for The Lies Within by Jane Isaac and I have a post by Jane to share with you all!

First though, here’s some information on the book! 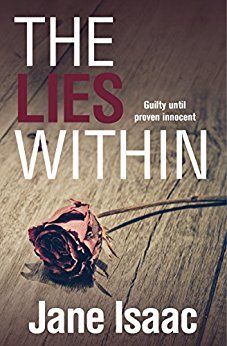 Be under no illusions by her kind face and eloquent manner… This woman is guilty of murder.

Grace Daniels is distraught after her daughter’s body is found in a Leicestershire country lane. With her family falling apart and the investigation going nowhere, Grace’s only solace is the re-emergence of Faye, an old friend who seems to understand her loss.

DI Will Jackman delves into the case, until a family tragedy and a figure from his past threaten to derail him.

When the police discover another victim, the spotlight falls on Grace. Can Jackman find the killer, before she is convicted of a crime she didn’t commit?

Thanks so much for inviting me onto your blog today!

I recently read somewhere that publishing a book is an adventure. I would argue that the adventure starts before you even put pen to page.

There’s the background reading on plot issues; the meetings with experts to establish police procedural points. Drawing characters and getting to know them requires people watching, observation of body language and traits that can take days, weeks, even months to amass. Even while the first draft is being written there are field trips – I’ll never forget the Sunday afternoon family dog walk where my daughter ran ahead and played with Bollo while hubby and I searched for suitable deposition sites for a body for The Lies Within. These are all the experiences that build the tower of paper that is later transformed into a novel.

Recently I decided to clear out my desk to make room for a new project. This is an exercise I do when every novel is complete and the final print run has been done, but equally something I seem to struggle with every time. It usually leads to an afternoon of nostalgia, where I go through all the research notes, photos and maps that formed the basis of my plans. All little pieces of the journey, tiny memories, that helped to build the story.

For The Lies Within, it was notes from my prison visit, maps of the settings of Stratford upon Avon and Market Harborough, notes from my time spent in Criminal Court Number Three at Leicester Crown Court; photos I’d printed out for context. There were early print outs of text with scribbled edits all over them, hand written notes on plotlines, potted histories for characters, basic descriptions of settings, background reading material, and receipts from lunches with dear friends who provided valuable insight into police procedure and psychological backgrounds.

Some of these, such as maps and character profiles, are retained for future reference. However, with a heavy heart, most of the pile of paper is transferred into the recycling bin. It takes me a year to write a novel, so this pile of paper represents a year of my working life. Disposing of it provides that final moment of closure; this truly is the end of the book’s journey to publication.

Strangely I’m not left with a clear desk. While this exercise marks the end of one novel, a research pile for a new project is already gathering height and I look forward to sharing many more treasured memories with this one before we reach our final destination.

Jane Isaac lives with her husband, daughter and dog, Bollo, in rural Northamptonshire, UK. Her debut novel, An Unfamiliar Murder, introduces DCI Helen Lavery and was nominated as best mystery in the ‘eFestival of Words Best of the Independent eBook awards 2013.’

The Truth Will Out, the second in the DCI Helen Lavery series, was nominated as ‘Thriller of the Month – April 2014′ by E-thriller.com and winner of ‘Noveltunity book club selection – May 2014′.

In 2015 Jane embarked on a new series, featuring DI Will Jackman and set in Stratford upon Avon, with Before It’s Too Late. The second in the series, Beneath The Ashes, will be published by Legend Press on 1st November 2016 with the 3rd, The Lies Within, to follow on 2nd May 2017.

My Thoughts On… Simon vs. the Homo Sapiens by Becky Albertalli