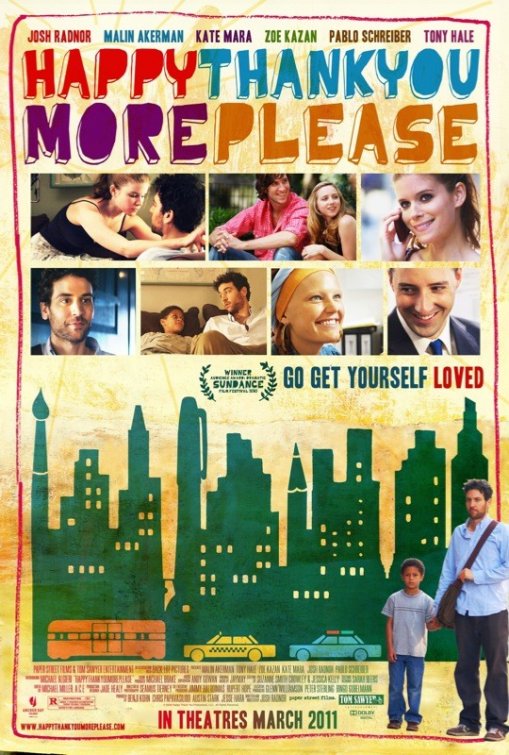 
Summary:
Captures a generational moment – young people on the cusp of truly growing up, tiring of their reflexive cynicism, each in their own ways struggling to connect and define what it means to love and be loved.

four out of five hearts
I have been wanting to watch this film since I first saw a trailer for it the year it was entered into the Sundance Film Festival (last year). I was hooked, I thought it seemed captivating and thrilling and interesting and it had Josh Radnor in and so I was completely sold. Unfortunately, as it was only a festival release, it was never released in cinemas here in the UK so my wait was made even longer. Then, finally, I find that it has been released on DVD! I was so happy and instantly added it to my rental list and was even happier when it arrived on my carpet. And the best part about all of this, it did not disappoint.
To get an understanding of why I liked this film so much, I feel it necessary to explain that I adore art house films. I love films with depth, that leave a message, that force us to ask questions or films that simply manage to leave a mark on our souls. I love blockbusters as much as the next person but honestly, most of the time, I would happily go to see an art house film over a blockbuster movie. I just feel that they have so much more to say. Happythankyoumoreplease definitely had a lot to say and I really enjoyed the message that it left; the point that it was trying to get across.
The performance by Josh Radnor was really good, very different from his character Ted in How I Met Your Mother, but for me it was the secondary cast that really blew this film away. Michael Algieri acted brilliantly as a young lost chid who was clearly having issues at home. My heart went out for him and I loved the way he just took on the role so well. I would definitely think that this boy is someone to keep an eye out on. Malin Akerman was also amazing in this film and I really felt for her and everything that she went through. I loved how strong her character was in spite of everything and I love how feel the film dealt with everything that she was going through. Kate Mara played her part well and you could really feel how she felt about Sam but didn’t really know how to deal with it. A stunning performance by all the cast overall.
The storyline was amazing. It didn’t have a generic blockbuster ending and it wasn’t even a film that had a specific arch but it was a film that had a theme, a message to get across to the audience and it really managed to do it. I loved the idea that love comes in many forms, sizes and places and sometimes without us even realising it’s right in front of us. I loved the way the stories came together and yet were completely separate all at the same time. It was truly captivating and lovely and filled my insides with goodness and happiness and some kind of hope that had been missing. I enjoyed the narrative of this film and I would quite easily recommend others to watch this film.
Written and Directed by Josh Radnor, this is his first film, and I am glad to sit here and tell you all that it was a brilliant debut into the film writing and directing world. It may have had its flaws here and there but it fit well together, had an amazing script and really was just a great watch that I would happily view over and over again. He has got a new film coming out this year called Liberal Arts and this also looks like it’ll be worth watching and I, for one, will once again be waiting on tender hooks for this to come around.
And because the trailer is what got me hooked in the first place, I am now adding the trailer so you can all view and hope to watch this film soon.
Faye

The History Keepers: The Storm Begins by Damian Dibben