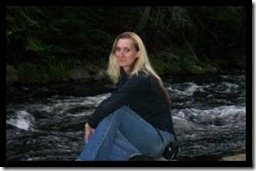 Jacqueline Paige is a world class multi-tasker being a mother to five adventurous and unpredictable children, a cafe manager and having a colossal imagination that allows her to step outside of reality into a world of paranormal romance —with just a touch of suspense.
Jacqueline lives in Ontario, Canada and avoids the ever changing weather of the region she lives in by creating other worlds to fall into in her stories of all things paranormal.
Her first book was published in 2009 and since then has published ten. She is always writing and currently has more than a dozen stories in one stage or another of the writing process.
You can find all of Jacqueline’s books at: www.jacqpaige.webs.com

Excerpt:
What could she possibly be doing that held this kind of force? He knew the answer as soon as he finished the thought; she was making some soul penance in exchange for Ricky’s health. A gust of anguish shoved against him as he forced his legs to keep going towards the bedroom.

Stopping momentarily to try and take a deep breath as the air crushed against his lungs and threatened to overtake him. Nothing was stopping him from reaching Rachel. Nothing!

He clenched his jaw and raised his hands against the swirling power. Picturing her inside; needing him gave him more than enough strength to shove it back from him. A picture on the wall rocked with the force and crashed to the floor. He stepped over it and glared at the door that held her from his vision. “Rachel!”

He knew she probably couldn’t hear him, knew because years before when the emotions of losing patients threatened to ruin him, he had tried to make a bargain to keep someone from passing. The price was too high in the end and he’d stopped. Part of him knew she wouldn’t stop, she would succeed and he couldn’t live with that.

Shoving his power towards the door, he managed to rock it. He didn’t know if he had enough strength to get through it. Fear swamped him and it held him there, unmoving for moments more than he should have let it. As he raised his head again and felt a rush of steady power flow over him and without turning knew that Chris had arrived. Objects flew past him and the noise of the rushing wind howled around him. Chris was not only here, but he was pissing off the force that Rachel had brought there.

Over the noise, he was barely able to hear Chris yelling only a few feet behind him. Steven hesitantly turned his head away from the door and looked over at Chris kneeling on the floor with his hand held out towards him. His hair was blowing as he held onto the railing with his other hand straining to hold his position at the top of the stairs.

“It won’t let me any closer, Steven! You can get through it.” Each word Chris said sounded as if he were in pain.

It took a few seconds for him to understand but he finally realized what Chris was saying. Because it was Rachel doing it, Steven was somehow protected, but it would eat Chris alive if he pushed any further. He nodded and looked back at the door. A resolve passed over him; he was not giving up Rachel!

Raising both hands towards the door, he placed one foot behind to brace himself against the incredible force the energies had. Clenching his jaw, he allowed the fear and anger run through him, gathering strength he was going to need. He felt his own hands shake with an energy that should have frightened him; ignoring it, he focused on the doorknob and watched as it began to shake.

Another rush of power hit him as he felt Chris trying to help him again. The doorknob snapped and dropped to the floor. Taking a deep breath he rushed forward and smashed his side against the door. It opened, pushing against him so he had to fight to move past it and enter the room. The forces from the spell being cast were suffocating him; he took shallow breaths trying to find enough oxygen.

Moving from the door, it slammed shut, sending him flying against the wall. In the center of the room Rachel knelt, her eyes closed in concentration, her lips moving in a silent chant. She held her hands over a black dish on the floor; he paused on her for a few more seconds and then looked at the items in front of her. He had been right, the symbols on the floor, the incense, and the other tools lying in there all pointed towards what he’d feared.

She knelt there, oblivious to the danger around her as objects in the room swirled around her, closer than he was comfortable with.

Gasping, he caught his breath once more and fought to think of a way to break what she had begun. A dark smoke swirled around her and he wasn’t going to stand there and see if it was getting closer as he suspected it was.

“Rach . . .” A blast of wind hit him and knocked his breath out of him. Wind. He straightened slowly and scowled at the dark mist circling the woman he loved. He was not going to stand there and watch her bind her life force with something like that for anyone, himself included. Fighting to move closer he raised both hands away from his body and focused on the air in the room. He controlled air and wasn’t going to allow some lurking spirit tell him otherwise. Sweat soaked his brow as he stared at the objects moving around the room. It had slowed, but wasn’t going to stop completely.

“Rachel! This is not the answer!” He shouted over the racket.

Armed with magic and a plan …