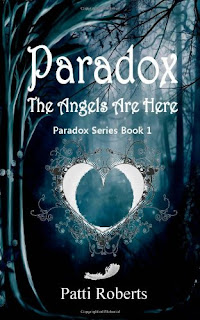 My name is Juliette. Nine hundred years ago, I died. Now my soul lives on in the body of a young girl…

Grace’s world is turned upside down by a visitor, the Angel of Death. She finds herself trapped in a nightmare, consumed by her paralyzing loss and overwhelming grief. The haunting visions and untimely deaths of others are a constant reminder that life and death are only a heartbeat away.

A journey crossing Two Worlds. One Ancient – One New.

How do the heartbreaking visions experienced by a little girl fit into this Ancient World of Angels, Myth & Legend?

Where lives are bound by blood – and nothing is as it seems. In a World where there are more questions than answers. This journey will leave you wanting and have you asking… Who, When, Where?

Is your Guardian Angel From Heaven or Hell…?
This is not a story about Vampires. However, we are talking about a predatory being that existed long before the word Vampire was ever whispered… the real monsters behind the legendary Vampire myths that reigned in Ancient times. They were a race of Fallen Angels called Grigorians. With their black feathered wings and their unyielding taste for human flesh and blood, it is easy to see how the myths about Vampires first began. And so today, while mankind continues to be enthralled by tales about Vampires and such, the real identity of the true villain, the Grigorian, remains hidden and free to walk among us at will…

There are those that know the truth. The Bulguardians. An Imperial race of Angels who continue to hunt and fight to the death in a bid to save humanity from extinction.

TWO OUT OF FIVE STARS **
The premise and the concept of this novel was one that I was really intrigued by and one that I was actually really looking forward to reading, therefore it is with sadness that I write this review. While others have loved, and I expect will love, this novel, it simply was not the right read for me. Personally I found it just too difficult to fully become attached to the story and just could not get myself invested in the story that was being told to me. This was unfortunate as I really did want to like this book.
That being said, this book did have its good moments. I deliberated between giving it a two or three stars before eventually deciding that two better suits my personal feelings towards the book. However, it was an interesting read and one that I was able to get through in just a couple of days. It wasn’t too long and was fairly easy to read, although it was quite difficult to get my head around some of the parts and I was left utterly confused as the novel continued its journey until, by the end, I simply felt at a loss. There are thoughts in my head on what could be happening which is quite interesting and is definitely a good way to lead into a sequel but I personally prefer to have most of the details in front of me. A first book, to me, should set up the story for the upcoming novels.
I did like seeing the world through Grace’s eyes. It was certainly a refreshing scene to view the world as though I was a twelve year old girl instead of the usual sixteen-eighteen year olds that I’ve been reading lately! I also loved how the middle section of the book worked, but I think that this is possibly because there was little angel interaction that was confusing or unexplained. I really liked Officer Wade and would read the next book just to see how that turns out because I think that is an especially interesting part of the storyline!
I did also enjoy seeing the angels from the evil side interacting with each other, but I also felt that they just didn’t seem evil enough to me. I know that it could have been a bit hard to get that dark feeling across but I just felt that they didn’t seem like they were dark enough for my tastes. But this is just a personal preference and others could feel that they’re perfectly evil for their likings. I believe the problem I had was just how little I connected with these characters, I didn’t despise them or love them, they were just there and it was a struggle to really see their purpose in the story. Of course, it is possible that this will come to light in the next novels of the series but for this one, it just didn’t work for me.
All put together this was an okay read. It wasn’t anything that really captivated my attention and it wasn’t a story that made me want to read the next instalment straight away but it was one that I am glad I read and one that I will probably try and continue, just to see if it ties everything together for me. If you’ve read to hear and are still wondering about my two stars, I feel I should justify once more that I just did not connect to this story at all. Perhaps the problem was the hype surrounding it and so I was expecting more, but either way, I just found it difficult to really get attached to story so while there are elements of the story that I enjoyed and liked, there were large quantities that I found disinteresting and just hard to like.
I received this book for review from the Goodreads group ‘Shut up and Read’s Read it & Reap and am glad that I was given the opportunity. I would recommend this book to people that like angel stories but perhaps have a wider knowledge of them then this reviewer!
Faye

A Demon Made Me Do It - Penelope King