Today is my stop on the Parallel blog tour and I am here today with an extract from the book! 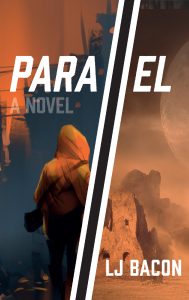 A dream so real that you can feel, taste and smell the world around you?

Déjà vu is a feeling which all too clearly tells you that you’re going somewhere you’ve been before, or experiencing something you know has happened to you already. Jacob knew that his weird dreams were much more significant than that.

When Jacob suddenly realises that the life he’s living isn’t his only life, he will have to uncover ancient truths and the schism that changed mankind’s history forever. He must determine the point at which the parallel world was created; the world the other version of Jacob inhabits.

He must discover who is controlling these split universes and why, before it’s too late.

Hi I’m lee, I was born May 1969 and raised along with my younger sister Dawn by our young mum in Barrington Road Brixton.
I went to Loughborough junior school where I didn’t do too well due to my being Dyslexic, back then Dyslexia wasn’t as recognised as it is now, and so I was seen as a disinterested or naughty child and so left to stare out the window with my mind full of magical creatures and locations. I would sit in my own little world having little imaginary adventures, but even so I still wished I could read all the books the other children were reading, but for me at that time it wasn’t possible, I loved the look of the books and the way they smelled and felt as I turned the pages but I couldn’t read them, and when asked to read in class as the other children did I would try but didn’t have a clue what I was looking at, I didn’t even know the letter sounds, my dyslexia didn’t allow me to remember them. And so, the children would laugh as I tried to sound the words out, and then I would just shut-down with embarrassment and clam up, I felt so ashamed.
When I went to secondary school it was much the same, I went to Henry Thornton boys school Clapham. The system couldn’t seem to help me, but I was clever with my hands and after school and weekends I would work in the garages at Loughborough junction railway arches where I learned a trade, the automotive repair trade, I was 12 years old when I started. I was striping and rebuilding crashed cars and loving it.
Back at school bulling was becoming a real problem so bad in-fact that I reacted when a bully had me cornered in the toilets stamping on my toes with football boots on, I had plimsolls on so you can imagine the pain was excruciating, I exploded and battered the bully, big mistake, the bully was very well connected and knew every other bully in the school and I was their target now. I was actually warned by a good friend that the bullies were after me and intended to do me real damage.
We were sitting in registration when about ten of the bullies stormed the class grabbed me and tried to drag me out the class kicking and punching me, the teacher just screamed for help, next thing I knew I was surrounded by teachers, in the brake time I was taken to the teachers tea room for my safety, and yet the bullies would still try and get me, they would open the door and shout we want Lee Bacon. In the end I was driven home by a teacher and another school official, they told my mum it was unsafe for me to return to school, and so at 15 I was taken out of school and left to it.
At 18 I passed my driving test first time and managed to land myself a job as a mobile windscreen technician which I still do to this day. I wanted to learn to read, so when I wasn’t working, I enrolled on an adult education course for English. And a big surprise to me I passed. Filled with confidence I wanted more than to be a windscreen tech, and so I started my own windscreen company (1st Choice Windscreen) which was doing very well until the insurance companies decided to use the major companies only, which put hundreds of us smaller companies out of business almost overnight.
It was when I lost my business that I started to have this story coming to the fore of my mind, the story was about a parallel existence, it was like a film in my head, I would try and write what I was seeing but due to losing my business I had to return to one of the major companies as a mobile tech, I was working 12 hours or more a day and sometimes 6 days a week which left me exhausted.
As for my dyslexia, I can now read any word put in front of me, but my dyslexia doesn’t allow me to remember them, so I struggle with spelling, but I find ways around this by using dictionaries and now thank god spell check, thank God for iPad, it checks my spelling as I write, and this is how I have managed to get the pictures from my head to a now published book, oh and this was also helped by an injury I suffered at work which put me out of work but enabled me to write PARALLEL, I see this as an act of God, meant to be, I was meant to wright this story and the next which I am working on now.
I find it incredible this boy that couldn’t even sound out the letters of the alphabet whilst at school and many years after, has suddenly been given the gift to write a book, and this is just the first.
I have now recovered from my injury and have now returned to working as a mobile windscreen technician, but continue to write the second book of Parallel.
I hope you enjoy my book.