Hey Guys!
Today I am introducing you to the absolutely stunning Käthe over at Good Lit and Green Tea. She has been my friend for a few years now and I love her! She’s a brilliant writer and (hopefully) an aspiring novelist because she damn well should be!
She wrote this post while sick, and my goodness, it is still amazing! She talks to you all about the Bartemious Series.
I can’t thank her enough for helping me out today.

——
Every person has a series that he or she absolutely cannot put down, no matter how old it is. I know many people who see the Harry Potter series as one, and others who prefer the Lord of the Rings. Nowadays, there are people who swear by The Hunger Games Trilogy, and even I am enamored by it. I mean, a dystopian society, civil unrest, a battle royale, and the clash between being human and returning to one’s basic (animal) instinct of staying alive—who wouldn’t love it? It’s the first series that ever made me love a female protagonist, and while that might mean that I’ve been reading all the wrong series—that is, those with female characters whose driving motivations may be strong but whose personalities and relationships fall short of my standards—I have to give credit to Suzanne Collins. She created strong, well-rounded characters, narrated their lives in a captivating yet realistic manner, and made the country of Panem come alive.
However, when I think of series like that—series that made me want to live in a world, to have grown up with this version of reality altered to fit what I want in so many ways yet still incredibly flawed—I still think of the Bartimaeus Trilogy by Jonathan Stroud. No matter how long it’s been since I read the first book in the series, The Amulet of Samarkand, I can never stop going back to it. It’s one of those trilogies for which I will never stop having a soft spot, and for several good reasons: 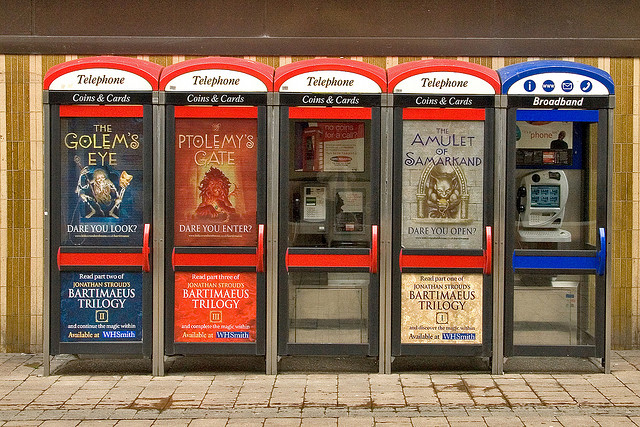 When a person can make a play on words like “out of order” refer to both the sequence of the books on the phone booths and the state of the phones within the booths… Let’s just say I love you.
The Setting. Imagine the bustling city of London, teeming with life. Dressed in assorted colors, people move through the sidewalks, talking to their friends; red double-decker buses make their way down the streets of London. The Tower of London, with its history of holding royals and pretenders alike, stands majestic against the modern city skyline. No longer ruled by the monarchy, the government is strong, but that is only because in this world, government officials aren’t ordinary people. Their power stems from the fact is that each and every member of it is skilled in controlling forces stronger than can be fathomed by the public. From the Prime Minister to the most minor of clerks, each official is a magician.
In this world, what are magicians? Simply, they are ordinary people with extraordinary knowledge. Children given up by their parents, their birth records destroyed and own names promptly forgotten for their own safety (for names have power), are handed over to the government, and each one of them is put into the care of a magician who can become his or her master. Through the tutelage of a senior magician, knowledge of ancient languages, types of spirits, and magic spreads through carefully selected channels to the impressionable youth. With vast learning at their fingertips, they are the best people who can rule the entire British Empire, with various European countries and North America under its control.
It’s an incredible world, one of which I cannot get enough. Whenever I read it, I’m sucked completely into it; I imagine myself as one of them, a magician wearing the most fashionable clothes, only my knowledge of spirits, better known as demons or more politely as djinn, keeping me from being another member of the faceless, largely uneducated public that is fed propaganda day after day. However, knowing what I do, seeing the flawed yet fascinating world, what else would make me want to read more?
The Characters. Stroud first imagined The Amulet of Samarkand while walking home in the rain, pondering the question of why “many fantasies feature heroic wizards battling against evil,” he said on his website. “I wondered whether I could turn this upside-down and instead make the human magicians into the villains.” By doing so, he twisted the usual dynamic, making the main character a sarcastic, witty, and ultimately self-preserving demon, Bartimaeus, and having as his polar opposite the talented yet unbelievably neurotic young magician named Nathaniel, whose ambition changes him throughout the books from a sheltered youth to a young man with knowledge far beyond his years.
Every successful series has a strong protagonist—or three—and this one is no exception. With the addition of a commoner named Kitty later on, the cast includes a variety of characters, but the main thing is that Stroud makes each one of them powerful in his or her own right. The magicians are shown at their most glamorous and at their most despicable, and the djinn, too, with their assortment of disguises, are a comment on how society, the environment, can change the most powerful of people. Things. Even the commoners have a voice, mostly in the form of the Resistance leader Kitty, and their dissent in later books reminds the reader how the voice of the people so influences that of its leaders.
The Plot. Like my other favorite series, the shift in focus from the characters’ inner life to that of the rest of the country—and even the world—is astounding. Bartimaeus is a creature of air and fire; that is figured out early enough. However, in the first book, Nathaniel starts off as a confused, twitchy prepubescent, one inauspiciously paired with an inept and cantankerous master, only to have his pride—and bottom—take a beating at the hands of (the demons of) one Simon Lovelace. Every magician has more pride than humility among his qualities, and Nathaniel is one of them, even while young, and so, in order to exact revenge on his tormenter, he summons Bartimaeus and tells him to steal the powerful magical artifact called the Amulet of Samarkand from Lovelace. What he does sends him down a path for which he wasn’t completely prepared, and he isn’t on his own; Bartimaeus, being the demon he enslaved, is along for the ride. It also doesn’t help that Bart finds out Nathaniel’s name, making the two connected, for better or for worse.
Mostly worse.
But it’s a joyride the entire way. From the first book to the second, The Golem’s Eye, which takes an older, more experienced Nathaniel to Prague, still brimming with resentment by its forced subservience to the British Empire, and even the last, Ptolemy’s Gate, new things are revealed, from Bartimaeus’ many illustrious masters, the history that swirls around this version of the United Kingdom, and the magic that keeps demons tethered to the earth. The world from which spirits come is described; that of the commoners comes close to be examined, only to be drawn away by events shaking the foundations of the world the magicians had so carefully made. And everything is seen from two perspectives, shifting to three from the second book onwards: that of Nathaniel, whose world is shaken by events he had begun himself; Bartimaeus, who isn’t willing to die while being enslaved by a boy; and Kitty, whose fiery personality and motivations make her more than a match for the first two. 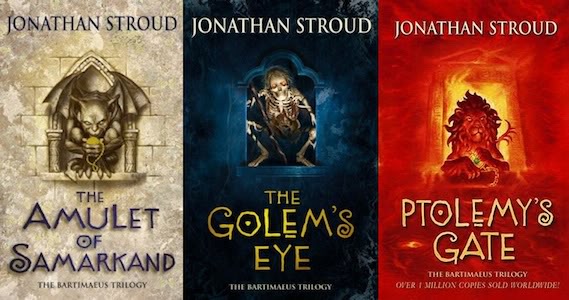 The books of The Bartimaeus Trilogy… and in order!
It’s thrilling, having a series with three characters whose lives I want to know, a world in which I want to live despite everything that makes it even less perfect than this one, and an undercurrent of mystery, intrigue, and adventure. It makes politics look captivating, magic seem more accessible than Harry Potter, lycanthropy seem more badass than piteous, and characters, no matter how minor, appear multifaceted. Romantic interests pop up now and then, but they never distract one from the plot. And what I love most is that each character’s voice is unique, and that no matter how witty each character is, he or she never, ever becomes generically so. I’ve read series in which the characters are all hilariously witty, but looking back, if I just left the quotations here without a source for you to compare, you would never be able to tell which character said which. That’s not a good sign.
It’s clear that if I had to give this series (and its 2010 prequel, The Ring of Solomon) a rating, I would give it five stars. And a half. That’s a lot of stars, just so you know. It probably helps that I’m a little in love with every single character, and that the series has every bit about urban fantasy that I love. I do hope that, by writing this, I’m shining a little light on what I believe is one of the most underrated series in fantasy, and that eventually Jonathan Stroud will see this and realize I’m a little bit in love with him, too.
Just kidding.
Now, go read about the magic. Love it. Live it.
The Bartimaeus Trilogy was written by Jonathan Stroud, a former editor of children’s books. Check out his website here, that of his trilogy (or, well, sequence) here, and follow him on Twitter at @JonathanAStroud. And if there’s any similarity between his name and that of his protagonist, don’t tell him. He probably hasn’t figured it out yet.