The Daughter’s Secret by Eva Holland

Today I am here to introduce you all to the lovely Eva Holland who has written a wonderful guest post for you all on the inspiration for the setting of her book, The Daughter’s Secret.

But first, here’s some more information on the book! 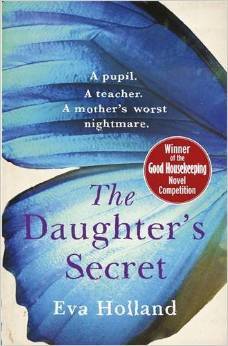 My daughter is a liar. A liar, liar, liar. And I’m starting to see where she gets it from.

When Rosalind’s fifteen-year-old daughter, Stephanie, ran away with her teacher, this ordinary family became something it had never asked to be. Their lives held up to scrutiny in the centre of a major police investigation, the Simms were headline news while Stephanie was missing with a man who was risking everything.

Now, six years on, Ros takes a call that will change their lives all over again. He’s going to be released from prison. Years too early. In eleven days’ time.

As Temperley’s release creeps ever closer, Ros is forced to confront the events that led them here, back to a place she thought she’d left behind, to questions she didn’t want to answer. Why did she do it? Where does the blame lie? What happens next?

The Setting That Inspired The Daughter’s Secret

My debut novel, The Daughter’s Secret, is set in St Albans, Hertfordshire. It is not a city I have ever lived in, I don’t have any family connections to the area and I have never been on holiday there. So how did I come to set my story of the fallout of a relationship between a teenage pupil and a teacher in the city the Roman’s called Verulamium?

Many years ago I briefly shared a desk with a woman who lived in St Albans and commuted into London. We worked in a city PR agency and every day began with us scanning the papers for news relevant to our clients. As we drank our coffee we would flick through the tabloids, skimming page after page of reports of crimes, drug busts, and yobs on drunken rampages as well as the usual celebrity scandals and photos of the royals. Whenever my deskmate spotted something particularly bleak and upsetting she would point it out to me, always with a quiet murmur of ‘that wouldn’t happen in St Albans’. News of misfortunes suffered by colleagues – a stolen bike, a pickpocketed wallet – was greeted in the same way. I was never quite sure whether she was trying to convince herself that she was safe from the ills that plagued the rest of the world, or anxious to prove to us that her home was a cut above our shared houses in (pre-hipster era) Hackney.

Many years and many desks later, when I decided to write The Daughter’s Secret, I thought carefully about where to set it. At the heart of the novel is the sense of something terrible happening to a normal family and a seemingly idyllic domestic set up being ripped apart. It was these thoughts that brought me back to my former colleague and her mantra. What if she was wrong and it could happen in St Albans?

I spent some time in St Albans while I was writing The Daughter’s Secret. It is a charming city: compact, attractive and packed with history. If I wasn’t so firmly wedded to London I would very happily live there myself. But, just like any other city, it’s full of people so it is no more immune to the things people do to each other than any other city on earth. It’s comforting to think that bad things happen to other people in other places, but these things are as likely to happen here as they are to happen there, however beautiful and idyllic here may seem.

A lifelong lover of words and stories, Eva Holland was the winner of the 2014 Good Housekeeping novel writing competition. She grew up in Gloucestershire and studied in Leeds before moving to London. When not writing or reading fiction she works as a freelance PR consultant and copywriter.

What do you think about the setting of this book?