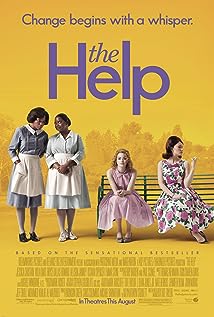 Directed by: Tate Taylor
Written By: Tate Taylor (Screenplay) Kathryn Stockett (Novel)
Main Cast: Emma Stone, Viola Davis, Bryce Dallas Howard, Octavia Spencer and Jessica Chastain
Storyline: Set in the 60s, in a small town in Mississippi, Skeeter (Stone) has just returned from university and has dreams of becoming a writer so when inspiration strikes, she does whatever she can to get her story written. However, her story needs the help from ‘the help’ and so starts her journey in trying to get real-life story accounts from those who are being treated badly. Once it gets written, scandal fills the small town as things begin to crumble but will things ever return to the horrid ways they were?
FOUR OUT OF FIVE STARS ****
There is something to be said about a film that can truly transport a person to the time and place that it has been set. The Help is definitely a film that is able to do this. Not many are fully aware of what the time was like for coloured women before racial equality was introduced and this is a film that, if it had been released earlier would have been filled with controversy. Possibly, due to its fictional background this film could be said to undermine the truthful facts at the time it was set but it has to be said that despite this, it certainly questions what things were actually like before.
But, putting these questions aside, these film is simply an inspirational piece of filmmaking. Emma Stone as Skeeter is absolutely brilliant and she really carries forward a character that just wants to do what is right. You can read the expressions on her face and the feelings that are going on inside without her even saying a word of dialogue. Besides, it is simply refreshing to see her in a film that isn’t targeted at just the teenage audience (Easy A, Zombieland). However, her stardom doesn’t undermine Viola Davis who plays Aibileen, one of the more prominent maids in the film. Davis flows extremely well and as an audience you are just able to feel the emotional strain that she must be under as her white employers just treat her as though she is dirt on the bottom of her show.
Of course, neither Stone or Davis manage to outshine Octavia Spencer who is just stunning in her performance as Minny. A character who is outspoken, overly-driven but also extremely kind and going through home abuse issues, Spence manages to truly bring her to light and forces the audience to deal with their emotions as they watch her struggling to deal with her life in such a torn apart world. Personally it was Minny’s performance that truly brought the film to its knees as she was not only the comic relief on a horrific situation but she was also the one that always brought things together. She was, after all, the one who was able to save the day.
Along with its stunning cast, the film is also visually beautiful with shots that encapsulate not only the scenery but the emotions of each and every character. The script is wonderfully written and didn’t ruin the film in anyway. Unfortunately, due to not having read the novel, it is impossible to relate this film back to the book at this moment but I do know that it is a book that has moved up to the top of my reading list as soon as I get my hands on it.
Generally speaking, this is a heart-felt inspiring movie that will most likely lead the viewer to tears, and then allow them to laugh out loud in the next moment. It is a film that is a must-see and one that inspires you to pick up the book that inspired it.