Hey Guys!
So today we have Aidy from Aidy’s Reviews! This was supposed to be posted on Tuesday but because I took too long with my cross review, it’s being posted today instead. Aidy has reviewed Treeless Mountain for you all.
I reviewed Hacker by Malorie Blackman for Aidy, and this can be found here. 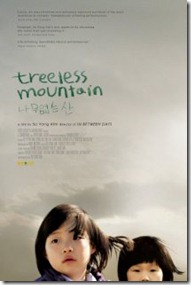 Treeless Mountain is a touching 2008 film made in South Korea, directed by So Yong Kim, born in Seoul, but raised in the United States since she was 12. It is about the struggle for two sisters, Jin (Hee-yeon Kim) and Bin (Song-hee Kim), to survive with their nonchalant relatives after being abandoned by their mother (Soo Ah Lee).

Jin is a lovely, intelligent child who adores going to school and math is her favorite subject. Every day after school, Jin enjoyed playing games with her friends. But this would make her late to pick up Bin from their neighbor’s apartment. One evening, the neighbor informs their mother she no longer will be able to watch after Bin. Realizing she can no longer afford her apartment or take care of her children, the next day, the mother heads off to meet up with her sister-in-law in order for her to take them back to her home. The girls have nicknamed her “Big Aunt”.

Before taking her leave, their mother gives Jin and Bin a piggy bank. She informs them when they fill up the piggy bank, she will return. It is evident their aunt doesn’t want them around; she uses what little expenses she has on Soju (an alcoholic beverage), instead of purchasing enough food for the children to eat. The title of the film originates from the children standing atop a rock covered hill they identify as a mountain, and using it as an observatory to wait for their mother to return to the bus stop. The girls earn money by cleaning around the house (recycling the many bottles the aunt has acquired from her binge drinking) and selling roasted grasshoppers to the neighborhood boys–three for ten cents.

While in their new surroundings, Jin and Bin befriend Hyun, a boy with Down syndrome. As a symbol of her gratitude, his mother welcomes the girls to visit her home when they desire and treats them to a copious amount of sweets. Summer begins to wane, and the grasshoppers go into hiding as cold weather approaches. Jin gets a brilliant idea after Bin uses one of the high value coins in their piggy bank to purchase a sweet bun–exchange the large coins for one cent coins. That way, they could fill the bank! The two sisters hurry to the shop keep to exchange their coins and then happily run back home to count their bounty.

Filling the bank finally, they sit at the bus stop, awaiting their mother’s return. Jin promises Bin they will come back the next day to wait. But then Big Aunt interrupts their plans with a letter from mom. She informs the girls she cannot come back, and they will have to relocate to their grandparents’ farm. Upon arriving, the grandfather immediately is upset and sees the children as a huge burden. However, their grandmother welcomes them with open arms and warms them with a fire.

Life on the farm isn’t bad to the girls; they have a grandmother that loves them and teaches them about family bonds. She helps them with daily chores and in return, they give her the piggy bank in gratitude in order to buy new shoes. Even still, they promise each other to wait for their mother.

Treeless Mountain is an enjoyable film, though it would have been better with more dialogue. The sisters were precious, and over time their sprits grew strong due to the sudden interruption in their normal way of life. It was admirable how they quickly adapted to survive in their new neighborhood and taking care of each other. Jin going out of her way to educate her little sister on what remainders she had of school life was a tender moment, and I feel this was partly due to their grandmother’s influence. She taught them the importance of being together as a family, and Jin used their grandmother’s advice to watch over Bin.