So, I do this a little differently. My blog is about books and films so I figure that my Waiting on Wednesday will also involve films that I am waiting to come out. I will post the trailer and say a little about the film and that way we can all enjoy new films that are coming out! =] 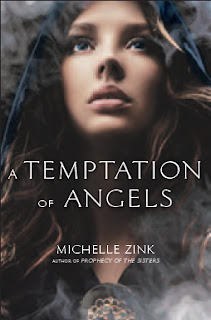 When her parents are murdered before her eyes, sixteen-year-old Helen Cartwright finds herself launched into an underground London where a mysterious organization called the Dictata controls the balance of good and evil. Helen learns that she is one of three remaining angelic descendants charged with protecting the world’s past, present, and future. Unbeknownst to her, she has been trained her whole life to accept this responsibility. Now, as she finds herself torn between the angelic brothers protecting her and the devastatingly handsome childhood friend who wants to destroy her, she must prepare to be brave, to be hunted, and above all to be strong, because temptation will be hard to resist, even for an angel. 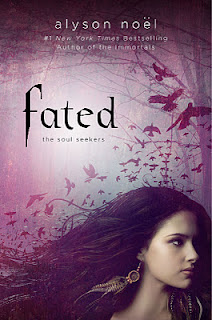 Strange things have been happening to Daire Santos. Animals follow her, crows mock her, glowing people appear from nowhere. Worried that Daire’s having a breakdown, her mother sends her to stay with the grandmother she’s never met, who lives on the dusty plains of Enchantment, New Mexico. There Daire crosses paths with Dace, a gorgeous guy with unearthly blue eyes.

Her grandmother recognizes Daire’s episodes for what they are – a call to her true destiny as a Soul Seeker, a person who can navigate between the living and the dead. Guided by her grandmother, Daire must be quick to learn how to harness her powers because Dace’s brother is an evil shape-shifter, out to steal them.

Daire must embrace her fate as a Soul Seeker and discover if Dace is the guy she’s meant to be with . . . or if he’s allied with the enemy she’s destined to destroy.

A Temptation of Angels has been on my radar for a while now and ever since I first saw it, I knew it was a book that I would love and that I really wanted to read and so, finally, I am featuring it on my WoW! It just has such a great synopsis, doesn’t it? Ahhh!
Fated just looks and sounds so… amazing! I mean, look at that cover!! I know, I know, don’t judge a book by its cover and all that but isn’t it pretty? And then, you read the summary and I know it’s a book that I want to read! Yay!!

When an unexpected enemy emerges that threatens global safety and security, Nick Fury, Director of the international peacekeeping agency known as SHIELD, finds himself in need of a team to pull the world back from the brink of disaster. Spanning the globe, a daring recruitment effort begins.

Prepare yourself for an exciting event movie, packed with action and spectacular special effects, when “Marvel’s The Avengers” assemble in summer 2012.

I have never read the comic books but I have seen almost all of the other films that lead onto this one and I can therefore say with glee that I am incredibly excited for this movie to come out! I can’t wait to see how it turns out and I mean… just LOOK at that trailer!! -falls over-