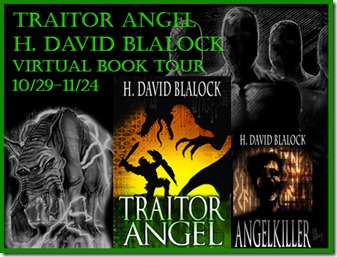 Hey Guys!
So today I am introducing you to the brilliant David Blalock, author of Angelkiller and Traitor Angel.
He has written you a great post on what he writes and why he writes. It is entertaining and interesting and I hope you like it.
Hope it helps you get a better insight into him and his novel!

Like just about every writer, I am often asked where I get my ideas. Unlike most writers, I seldom give a flippant answer. Usually I refer to observation and interpolation, but the truth of the matter is I get my ideas from…

But, let me talk about characters in fantasy. I find the current fascination with the undead perplexing. What is it about zombies that has generated such a mystique? Is it a symptom of a society that is so inured to violent death that it wants to deny death is a finality? Honestly, I don’t understand it. On the other hand, the reason might be…

You know, I’ve been writing for a very long time. Concentration, being able to string a coherent series of thoughts into a marketable story, is critical to my success as an author. I spend lots of time working on plots and outlines to…

But I was talking about fantasy characters. I don’t like writing about vampires or werewolves, and definitely not about zombies. They’re boring. The traditional ones don’t have the ability to think, and they certainly aren’t given to doubting themselves, looking for a cure for their condition, or relationships with normal people. The idea that a regular person would want to even kiss a corpse that spends its nights in a coffin, or eats human flesh…

So I write fantasy, but my monsters are monsters, not boy or girlfriends. The villains I use are real villains, not emotionally stunted or misunderstood. The heroes are heroic and self-sacrificing. I believe in creating stories that pull emotions from the reader, and even though people don’t want to admit it, they react most strongly to strong characters that know who they are and what they’re doing.

We want to identify with people who don’t have our problems and there is just too much fiction today, in book and movie form, that doesn’t provide that. Rather than allowing us to suspend our disbelief for a while and become part of a clear-cut conflict with a real, lasting solution, it drags us further into the turmoil we see around us every day.

I write to give the reader escape. If you want to bury yourself in the soap opera of everyday, then my writing isn’t for you. If you want fiction with a positive message, where people fight with courage and dedication, whether they win or not, then you should read my books. 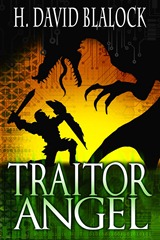 In Traitor Angel, the second book of the Angelkiller Triad, the war between The Army of Light and The Enemy continues behind the scenes. Unknown to the general population, the battle for control of humanity is heating up.

Jonah Mason, called Angelkiller, faces more than one decision. His Army resistance cell is wounded physically and emotionally, on the brink of falling apart. The mysterious allies calling themselves Knights are pressuring him to abandon his people. Meanwhile, the world outside draws closer to Armageddon.

As Mason and his friends pursue their campaign against Dorian Azrael’s global megacorporation, Andlat Enterprises, the stakes get higher with each desperate foray into the enemy’s computers. They are fated to lose one of their number and gain an unlikely ally, but any advantage they gain could be fleeting at best.

If they fail, it could mean the end of The Army and all resistance to the forces of Darkness. 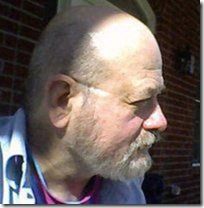 H. David Blalock has been writing speculative fiction for nearly 40 years. His work has appeared in print and online in over three dozen publications, spanning every format from short stories to novels, non-fiction articles to screenplays. He is also editor of _parABnormal Digest_ for Sam’s Dot Publishing. To find out more visit his website at www.thrankeep.com.