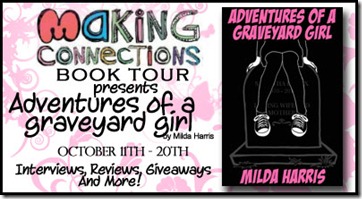 Hey Guys!
I’m the stop on the Adventures of a Graveyard Girl blog tour today and for it I have a wonderful review for you all.
Enjoy! 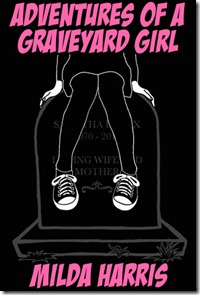 Kait Lenox is back! It’s Homecoming Dance time and Kait is excited. It’s her first dance with a date and that date is none other than one of the hottest, most popular guys in her school, Ethan Ripley! For once Kait doesn’t feel like a funeral crashing weird girl and it’s the most perfect romantic evening ever…at least until a girl gets murdered in the high school bathroom. Rumors fly, panic ensues, and Kait can’t help herself, she assigns herself to the case!

Before the Crime
Adventures of a Graveyard Girl is the second book in this series and it is definitely a better and more entertaining read than it’s predecessor. Unfortunately, I found Adventures in Funeral Crashing to be a little too juvenile for my tastes (full review here) but it was still an entertaining read that I enjoyed and one that did have me wishing to read more. Therefore, when the opportunity to do just that came around, I couldn’t pass the opportunity up. Fortunately I definitely preferred this novel and enjoyed it a lot more. It was a good book that kept me interested. There were times that I groaned inwardly but these were, luckily, few and far between.

Investigators Unite
One of the biggest problems I had with the first book in this series was my distaste for the main character, Kait, but I am glad to admit that she wasn’t anywhere near as annoying in this book. I am not certain if this is because she was written better, if I simply got used to it, or if I am just in a different frame of mind this time around but whatever the reason, it certainly helped to make the book more enjoyable. Kait has a hard time letting go of her curious nature and it means that investigating a murder that happens at her school is something she simply has to do. While I’ve never read the books, she actually reminds me of Nancy Drew a lot and I have a feeling that fans of those types of books will really enjoy this book.

The other characters in the book were quite interesting to read about as well. Ethan was as charming as ever; protective of Kait while also being a moody teenager with his own flaws. Suzie and Kyle were cute together but I once again found myself wishing that they could have had a bit of a bigger spotlight in the book but they did help to make me smile which is always good. April was one character that I struggled to get my head around. There were times when I liked her and times when I disliked her but all I know is that she definitely helped to make things in the book more interesting!

To Solve It
How everything came together at the end was really well put together. I did, unfortunately, guess who the murderer was quite early on in the story and kept hoping that Kait would see the hint but that is probably because I have read quite a large proportion of crime books and am better at spotting these things! Needless to say, guessing the killer didn’t make the book any less exciting. Milda has filled the book with lots of different things going on and interlinking throughout the book to keep the reader interested. There were never any truly dull moments as even when the investigating wasn’t happening, something else riveting or intriguing was happening instead. All the layers truly helped to make the book a decent read.

Despite all of the good points, I did still find that the writing style was difficult to adjust to at first. Although written from the viewpoint of sixteen year-old Kait, there were times where I was actually unsure of how old she was due to the language and writing style of the novel. Generally speaking the style helped to make it a nice, easy read without too much heavy thinking but it also gave a very “young” reader vibe. This is a young adult book that is definitely more suited to the younger end of the spectrum. I believe that adults who read YA may find this to be a little less interesting than those who are younger. Fortunately, having read the first book beforehand, I was ready for this style and I believe that this helped to quickly get used to the style and to simply go with it.

Saving Everyone
All in all, Adventures of a Graveyard Girl was an entertaining, and enjoyable read that I was really glad to have taken the time to read. It had me laughing in places, tearing up in others and simply sympathising with the characters and all of the high school dramas that they were dealing with. It was fun and quirky and Kait is definitely someone who can be used to show that being who you are is much better than conforming to who they want you to be. It has a great message within the story and I feel that there are many other readers who will really enjoy this novel. I would recommend this book to teenagers between thirteen and seventeen but feel that some older readers may appreciate the book as well.

** I received this book in return for an honest review **