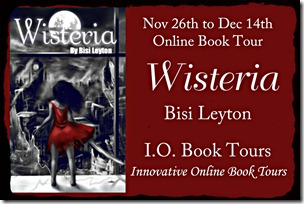 Hey Guys!
So today I am the tour stop for Wisteria by Bisi Leyton. I am here to share with you all my review of this book! Hope you enjoy :) 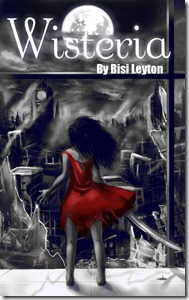 Sixteen year old Wisteria Kuti has two options—track the infected around the Isle of Smythe or leave the only known safe haven and face a world infested with flesh eating biters. But even with well-armed trackers, things go wrong and Wisteria ends up alone facing certain death, until she is rescued by the mysterious Bach. Uninfected, Bach is able to survive among the hordes of living dead.

Eighteen year old Bach, from a race known as The Family, has no interest in human affairs. He was sent here to complete his Great Walk and return home as a man—as a Sen Son. The Family regard humans as Dirt People, but Bach is drawn to this Terran girl, whom he has never seen before, but somehow knows.

Hunted by flesh eaters, cannibals, and the mysterious blood thirsty group called Red Phoenix, Wisteria and Bach make their way back to the Isle of Smythe, a community built on secrets and lies.

the infected
As soon as I heard the synopsis for this book, I was instantly intrigued. I haven’t read many zombie stories and just as few sci-fi books and so I was curious as to whether this book would be of my liking. I did enjoy the concept of this book and found the story to be entertaining, but for me it simply didn’t quite hit the spark as many other books have. But, it is still a book I would highly recommend and one that I am glad to have given a chance to read. Bisi Leyton is an author who has a lot of potential and I am interested in keeping an eye out for more of her work. Wisteria is a novel that is easy to devour while drinking a cup of tea and simply tuning out the world.

are taking over
There are a great many things about this book that I enjoyed, one of which was Bisi’s take on zombie’s. I thought the way they looked was interesting, and how they moved in packs made the story interesting. But it was the way these zombie’s were created that really intrigued me. This is not something that is explained until near the end of the book, so I won’t spoil it but just know that it is definitely an interesting concept that I liked reading and finding out about. I felt that the world was really interesting with it’s dystopian-like qualities and I think that the way she captured human interaction during this time was really clever and interesting, and just simply well done. It helped to make the visualisation of this novel easy and realistic.

The plot of the book was definitely an entertaining one! You’re never sure what was going to happen next, it is fast-paced, and full of plots and twists at every turn. I was often on alert, certain that something dreadful was around the corner and there were a fair few twists that I definitely didn’t expect to happen! The romance in this story was also quite intriguing. It wasn’t an easy-ride but it was quite intense and exciting. And the revelation at the end of why was definitely worth reading. There is enough in this novel to make it a good read, keeping the reader interested and making it difficult for them to stop turning the pages!

someone must stop
At first, I struggled to find myself sympathising with the main protagonist, Wisteria. She seemed unstable to begin with and I just found it difficult to connect with her. As the story progressed, I understood her better and while there were times that her actions still grated on me, I realised that it was just who she was and how she had been brought up to be. Wisteria was stubborn, protective, caring, and loyal, but she was also angry, defensive, and hard to crack. She had a hard life and was just doing her best to survive. She made a good character for the story, and I’m definitely interested to know what will happen in the next few books of the series.

On the other hand, Bach, our second protagonist, was one that I easily understood. He was stuck in a difficult predicament and while it irked me how he thought about humans, it was also easy to understand from his background. He was conflicted throughout the book, not sure of his own emotions. He was anti-social but trying to be social, didn’t get Wisteria’s “mood swings”, tried to push people away because he could do it on his own but then needed people. He was a brilliant character who was on a quest to find himself, something that he was clearly having trouble with! I’m curious as to how he will manage as the series continues.

them before it
Unfortunately, while the story was interesting and exciting, there were a few issues that I had with the story as well. Some of the place names were lost on me, and I found myself getting confused over them a few times. I also wasn’t entirely sure about the dual narrative of this story at first. It seemed a little forced. I understand it was necessary but it just didn’t flow well to begin with. Towards the end it did get better – or I just got used to it a bit more, but it took a while. Of course, these things are also likely to be the same reason why others will pick up this book and devour it but I’m always a little iffy with dual narrations at first!

is too late
Overall this was an interesting story that I enjoyed and felt was a very unique concept with a fast-paced plot. It kept the reader interested and intrigued, leaving them wanting to know what was going to happen next. It had just the right amount of suspense and mystery and left the story at the right moment. It is a book that I would recommend to zombie-lovers and to sci-fi geeks, but also one I would recommend to anyone who wants to read a book which holds a forbidden romance that has the possibility to pull at your heart-strings. If that sounds like the type of book you’d be interested in, then why not pick up a copy today!

Bisi Leyton was born in East London in 1978. She grew up in London, Nigeria and the States, listening to the stories life and love from aunts, cousins and big sisters. She lives in London, but has worked around Europe including France, Germany, Ireland, Belgium and the Czech Republic. She has a fondness for reading graphic novels.