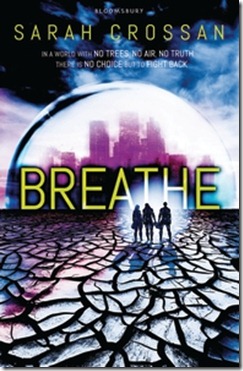 Quinn
should be worried about Alina and a bit afraid for himself, too, but even though this is dangerous, it’s also the most interesting thing to happen to him in ages. It isn’t every day that the girl of your dreams asks you to rescue her.

Bea
wants to tell him that none of this is fair; they’d planned a trip together, the two of them, and she’d hoped he’d discover her out here, not another girl.

And as they walk into the Outlands with two days’ worth of oxygen in their tanks, everything they believe will be shattered. Will they be able to make it back? Will they want to?

Once there was Air
When I first heard about Breathe, I was instantly swept away by the magical cover. I mean, just take a look at it for a moment. Now read the synopsis… and the title… and how could you not want to read this? It already sounds so amazingly captivating, doesn’t it? These were my thoughts and so when I was asked if I wanted a review copy of this book, I simply had to say yes. Now, after having finished this book, I am so glad that this book landed in my lap. It is a story that really pulled me under and by the end of it, I was simply aching for more. For more concrete reasons as to why you should pick up this book, keep reading below.

But then it ran out
The very first thing to notice about this book is the world in which it is set in. The world as we know it is long gone, humanity destroyed all the trees for selfish reasons until there was not enough oxygen left in the world for people to live. Then came Breathe, a place where a select few were able to live with enough oxygen, it was a safe house against the disaster outside. Now, a few decades on, the lives of three young teenagers living in Breathe changes forever. I loved the concept of this book. I loved the descriptions of how it came to be, the stories of what happened before and what happened after. I found it so creative the way Breathe was separated into three different zones, zone 1 for the rich – or the premiums – and zone 3 for the poor – the auxillaries. Zone 2 was the middle ground were everyone worked or went to school. It was astonishing to read about and was incredible easy to imagine in your mind.

The wastelands were also really well described. I could imagine the broken down villages, the drifters and everything else that happened. It was so amazing and kept me captivated. But really, for me, the best location in this book was The Grove. I won’t say too much about it for fear of spoiling it but this was a magnificent location with such amazing imagery surrounding it. I loved reading it and was just awed at Sarah Crossan’s imagination. I have not read any other novels by Sarah but if this is what her world-building is like across them all, I will happily read more.

so only a few survived
There are three main characters in this story; Alina, Quinn and Bea. Straight away I found myself struggling to like Alina. It wasn’t that I didn’t like her, as such, it was simply that I didn’t know if I did like her. I was unsure of her character. Unfortunately this feeling of uncertainty didn’t leave throughout the novel. I could see the journey she took as a character and appreciated it but I think I need to see more of her to know exactly how much I like or dislike her. Bea, on the other hand, was on character that I instantly fell in love with. She was so strong yet she wasn’t sure of herself. She was smart but didn’t want to outshine Quinn. She had so much potential in her and her emotions were just so real and amazing and I think I just managed to connect with her so much. For me, Bea simply made the story worth reading.

Quinn was a character that I started out unsure of. I couldn’t quite work out if I liked him because he seemed shallow and an idiot – not in terms of book smarts – and just seemed to fly through life without a care in the world. But then somewhere in the book I started to like him. I’m not even sure I could pinpoint an exact moment when it happened but I just suddenly realised that I cared about what happened to him, I wanted him to succeed and show the world what he was truly made of. He was so strong and ready to stand up for what he believed him and I just admired that quality in him. I’m certainly going to enjoy reading more about him and about Bea too.

and they wanted to live
The writing style of this book was a bit baffling to begin with. Written in first person POV, it took a while to get used to fact that it switches between Alina, Bea and Quinn. However, once I was about six chapters in, I was used to it and barely even gave it a second thought. The book was also split into different parts and I really liked this about it. Different plot points happened within each part to set off the epic conclusion and I just feel that it worked really well. I also liked that it was written in first person because sometimes it can feel unnecessary but I think that Sarah Crossan has really managed to get this narrative style to work for this book.

While there was one over-arching plot to this story, it was, without a doubt, a book with many underlying layers. Throughout the book it brought about themes of friendship, and how strong and powerful friends can be, it covered issues surrounding family in really interesting ways that really grabbed at me. I really loved some of the families that were in the book. It also touched upon the idea of being strong enough to fight but also the knowledge of knowing when it is the right time to fight and how the best way to fight is. Do you just lie down and let them take away everything you love or do you take a stand and make sure that you don’t go down without a fight? But really, for me, the best sub-plot of this novel was the romance aspect. I’m extremely picky when it comes to romance but what was shown in this novel was raw, fresh and emotional and it just felt so real and great and I just loved it. It wasn’t fast and it happened just the right way.

not to lie down and die
All in all this was a compelling story that I truly struggled to put down. It had all the elements of a brilliant dystopian novel and it just really managed to keep me interested and hooked. The characters were all so complete and complicated and real that it was often difficult to remember that you were just reading a fiction novel. This book ends with such a climax as well, so many things come together throughout the book and when it finally finishes, the reader is left with some gaping holes and many thousands of questions. It was an interesting, cliff-hanger-like ending that has made me aching to get my hands on the next instalment. This novel is about finding yourself and showing the world who you are.

** I received this copy in return for an honest review **