Search
Hey Guys!
Today I am introducing you to Aidy from Aidy’s Reviews! He has kindly written a film review for this site and this will (hopefully) happen every week (on tuesdays!).
I have also written a book review for his site which I will let you know about when it is up!
Without further ado; 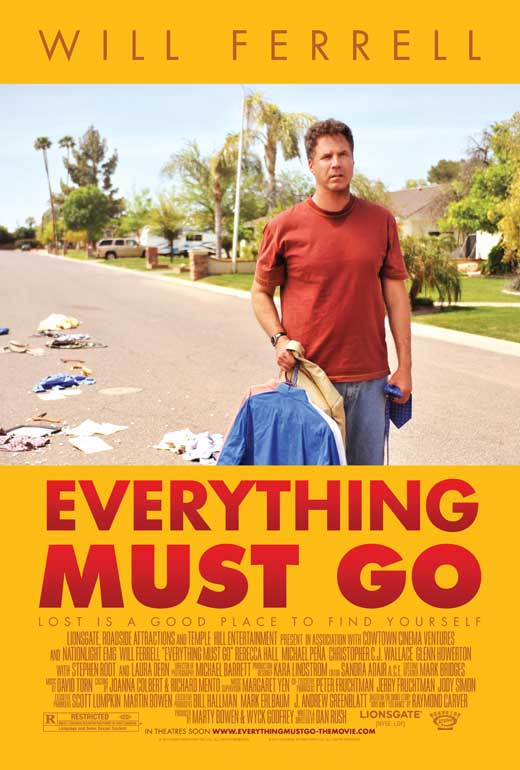 Director: Dan Rush
Writers: Dan Rush, Raymond Carver “Why Don’t You Dance.”
Stars: Will Ferrell, Rebecca Hall, and Christopher Jordan Wallace
Everything Must Go is an indie film that is based on the 1981 short-story by Raymond Carver called Why Don’t You Dance. The story is about a man named Nicholas Halsey (Will Ferrell), a semi recovering alcoholic who has just lost his job as a salesman and at the same time, his wife and his home.
There isn’t much to be said about a person who has hit rock bottom and is forced to live among all worldly possessions strewn about on the front lawn of what used to be his home. While he sifts through all the things that he thought of as influential in his life, he is forced to return to the realization that life as he knew it was over after repeated attempts to phone his wife failed, his credit cards cancelled–his car repo’d. He has to start his life over somehow. But not before buying him another case of beer, and sleeping in his Lazy Boy recliner on the front lawn as an effort to maintain a sense of normalcy.
He abruptly awake to the sprinklers on his front lawn, and bumbles about trying to prevent the water the prized furniture and equipment that he owned. A young kid, Kenny (Christopher Jordan Wallace), who is left alone to fend for himself while his mother cares for a sick person, rides up on his bike and becomes an unintentional source for wisdom, and eventually a savvy business partner. He becomes friends with Samantha (Rebecca Hall), who never quite asks him why he is living out on his front lawn. It seems she has more things to deal with on a personal level, being pregnant, waiting for her husband to join her at their new home, and giving up her job as a photography teacher in New York so that her husband can focus more on his career.
The film comes down to that inevitable fact for each them–that life is a eternal process of learning. Ferrell’s character had to learn again what it is like to be normal–away from the booze. It is as if for the first time, he is beginning to hear what people perhaps have been saying to him all along–get your life in order. The film places an emphasis on his character’s self-pity, anger, and insecurities, forcing him to confront life’s inner demons while sober. “Everything” is one more film that forces us emotionally, to respond to a down on his luck, broken alcoholic who is evidently, a good person. Nicholas Cage was successful at portraying an over indulgent and repressive alcoholic in Leaving Las Vegas. Ferrell doesn’t drink himself to death nor does he come close to doing so. He just haphazardly navigates his neighborhood and confront a few self-actualization’s along the way.
What does prevail in the film is what these three individuals have in common–isolation. The story and its characters are of a stoic capacity and the overall, the ineffective social narrative of the film just empties there, on Nick’s front lawn. You know that these three people are hurting somehow and yet there isn’t enough of proper motivation in the story to resolve matters. It isn’t until Nick realizes that he can no longer live on his front lawn and finally agrees to let go and sell all of the tangible parts of his life that the movie finally ends where it begins–on his lawn. Sadly, we are left wondering just how everyone will fair thereafter. Real life isn’t so easily resolvable, and it is disappointing that the film eluded a more conclusive concept for believability.
2.75 OUT OF 5 STARS ***

The Scourge of Self-Censorship; Guest Post By Virginia Clay

Things I Do When I’m Not Writing by Nataly Restokian

My Thoughts on… The Christmas Promise by Sue Moorcroft