Hey Guys!
So on the first official day of Fresh Start September we are hosting the wonderful and amazingly talented C. J. Redwine, this is also doubling as her third stop of her blog tour! (Banner below).
I was lucky enough to have a chance to read an ARC of her book Defiance and I have fallen in love with not just the book, but the brilliant author behind it all. So it is with delight that I have her here today with an interview for you all!
First of all though, let’s tell you all a bit about Defiance.

Add this book to your TBR list on Goodreads

Synopsis from Goodreads:
Within the walls of Baalboden, beneath the shadow of the city’s brutal leader, Rachel Adams has a secret. While other girls sew dresses, host dinner parties, and obey their male Protectors, Rachel knows how to survive in the wilderness and deftly wield a sword. When her father, Jared, fails to return from a courier mission and is declared dead, the Commander assigns Rachel a new Protector, her father’s apprentice, Logan—the same boy Rachel declared her love for two years ago, and the same boy who handed her heart right back to her. Left with nothing but fierce belief in her father’s survival, Rachel decides to escape and find him herself. But treason against the Commander carries a heavy price, and what awaits her in the Wasteland could destroy her.

At nineteen, Logan McEntire is many things. Orphan. Outcast. Inventor. As apprentice to the city’s top courier, Logan is focused on learning his trade so he can escape the tyranny of Baalboden. But his plan never included being responsible for his mentor’s impulsive daughter. Logan is determined to protect her, but when his escape plan goes wrong and Rachel pays the price, he realizes he has more at stake than disappointing Jared.

As Rachel and Logan battle their way through the Wasteland, stalked by a monster that can’t be killed and an army of assassins out for blood, they discover romance, heartbreak, and a truth that will incite a war decades in the making.

Intrigued? I certainly was! Now that you know more about the book, are you ready to get to know the author a bit more as well? Here’s the interview!

Some authors use structures and plots when they write their books but a few write with only a mere outline in mind, was Defiance a heavily plotted book or a simple idea taken a long way?
I like to have the big milestones in place before I write so that I have something to aim for. I think through the game changing moments at the ¼, ½, and ¾ mark and then write toward those. Almost everything that happens in between those points comes as a complete surprise to me as I write.

Defiance is your first book to be published, how many novels have you written before that are sitting on the “dusty shelves”?
Defiance is the fourth novel I wrote. My third novel is an adult urban fantasy, and I’ll be publishing that next year. The other two? Yeah. Never seeing the light of day unless I need a hefty doorstop. :)

So many books feature monsters that need to be battled, what makes your monster different from all the others?
The monster in my book is an underground version of the Leviathan. He’s a blind, fire-breathing, wingless dragon who tracks his prey by sound. At any moment, he can tunnel up from beneath you and … that’s that.

If your book had a soundtrack, who would some of the artists be that it would feature?
One Republic, Red, Evanescence, In This Moment, and Hans Zimmer.

If you had to run a marathon – or hey, write a novel! – for a charity, what charity would you choose?
If I had to run a marathon for charity, I’d have to collect bets on how far from the finish line I’d be before I collapsed and asked for a peach tea and a visit from Johnny Depp to restore my equilibrium. :) But the charity I’d choose is Both Hands, an organization that helps adopting families fundraise for their adoption by doing a work project on the home of a needy widow. My husband and I adopted our daughter from China two years ago, and we did a Both Hands project, and it was life-changing for everyone involved.

If you could only eat one type of food for the rest of your life, what would it be and why?
Oh, wow. *thinks* I’d have to say fruit smoothies w/protein powder in them. I was going to go with my first love and say lemon bars, but even *I* couldn’t survive on lemon bars for the rest of my life.

I want to say a big thank you to C.J. Redwine for participating in Fresh Start September and allowing Melissa, Daphne and I to bring you this interview.
A Review of Defiance will appear on this blog today or tomorrow.

As a bonus part of the event, we are giving everyone a chance to win some prizes donated by our wonderful participants and ourselves! The prizes include:

The giveaway is INTERNATIONAL and will run until the end of the event (30 September). Remember to follow the Twitter and Facebook pages of the prizes you want to win, for example, to be eligible to win the Strange Chemistry Prize, you must follow them on Twitter and Facebook. Good luck!
a Rafflecopter giveaway 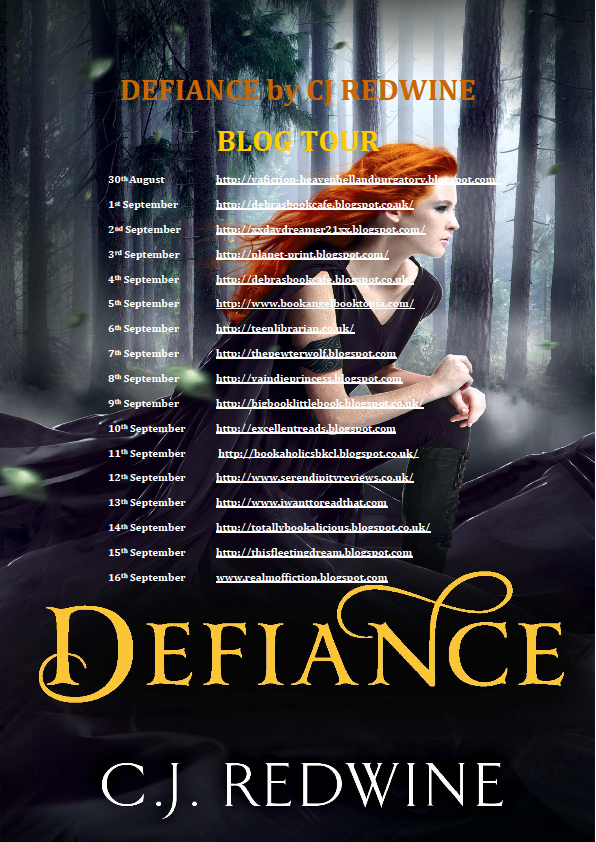