The Darkest Hour 3D (Release Date: 13/01/2012)
Sci-fi action-thriller ‘The Darkest Hour’ is the story of five young Russians’ battle for survival following an alien invasion.
The invisible extraterrestrials are intent on absorbing Earth’s energy and destroying its lifeforms, a plan which puts the five fugitive friends directly in their path. Forced to fight or die, they make a last stand using Moscow as their arena.
TRAILER: http://www.youtube.com/watch?v=VUznviXV-U8 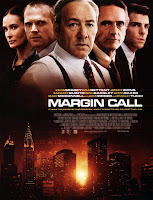 Margin Call (Release Date: 13/01/2012)
Inspired by the catastrophic world financial collapse in 2008, thriller ‘Margin Call’ takes us behind the scenes of a Wall Street investment bank as their executives face the worst day in the organisation’s history. As the money markets plummet, the film follows the unscrupulous bosses as they desperately attempt to salvage their own money with no regard for their clients’ investments.
TRAILER: http://www.youtube.com/watch?v=1jQoScJFNj0

Shame (Release Date: 13/01/2012)
‘Shame’ follows Brandon (Michael Fassbender), a New York loner with a secret; though he avoids becoming intimately involved with women, he cannot control his desires and is compulsively addicted to sex.
His insular existence is invaded when his younger sister Cissy (Carey Mulligan) moves into his apartment. Her unwelcome arrival stirs up negative emotions from the past, and his already chaotic life begins to spin out of control.
TRAILER: http://www.youtube.com/watch?v=arD1Hmjlqag

From director Steven Spielberg comes ‘War Horse’, an epic adventure for audiences of all ages, set against a sweeping canvas of rural England and Europe during the First World War.
‘War Horse’ begins with the remarkable friendship between a horse named Joey and a young man called Albert, who tames and trains him. When they are forcefully parted, the film follows the extraordinary journey of the horse as he moves through the war, changing and inspiring the lives of all those he meets – British cavalry, German soldiers, and a French farmer and his granddaughter – before the story reaches its emotional climax in the heart of No Man’s Land.
The First World War is experienced through the journey of this horse – an odyssey of joy and sorrow, passionate friendship and high adventure.’War Horse’ is one of the great stories of friendship and war.
TRAILER: http://www.youtube.com/watch?v=QhueHIXbTF4
———-
THE FAVOURITE: Shame
I was tempted to choose The Darkest Hour, which actually looks really interesting but I finally decided against it and went with Shame which is a citically acclaimed film for one but for two, it just looks extremely good, doesn’t it?
what’s your favourite?