Hey Guys!
Today I have for you all a lovely guest review from Mike!
“Hi, I’m Mike, Faye has indulged me in letting me loose on her blog to do a book review for her. Hope you enjoy!” 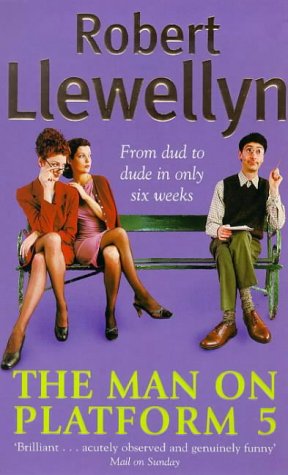 Summary:
Ian Ringfold is an ubergeek, specialising in trainspotting. He’s happy in his world.

Gresham and Eupheme, half-sisters who argue about anything and everything, spot him on a platform at Milton Keynes. They agree a wager – Eupheme says that she could change Ian into a fantastic man that would be admired by womankind anywhere, while Gresham insists that nothing could be done to redeem him.

Ian gets taken on an incredible journey to convert him from geek to cool dude, learning about the world. But it’s not just Ian that has his eyes opened.

I bought this book because of its author, Robert Llewellyn. If you’re not familiar with Robert Llewellyn then you aren’t a geek from the UK. Robert is probably best known as Kryten in the comedy series Red Dwarf, or more recently as the presenter of Scrapheap Challenge, a show where a team of enthusiastic engineers are instructed to build some sort of bizarre machine out of all the gubbins they can locate within a scrapyard. As you can imagine, he has some experience of geeks, making him ideally placed to write this book, which I’ve enjoyed again and again for the best part of a decade.

Essentially Ian Ringfold, a supermarket deputy manager from a small town in the Midlands, gets taken by Eupheme and transformed, through a variety of purchases, lessons, and the gym (ugh… I feel dirty just typing that word), into a man that is admired by men and fancied by women from the London elite. It keeps ticking over nicely and Gresham, Eupheme’s half-sister, steps in to throw enough twists into the story to keep you engaged. The author gives great detailed descriptions which I found change as I age – the first time I read this book I’d never been to London and imagined the places in one way, and now when I read it again I can imagine the places easier.

There is a host of supporting characters but the heart of the story is between Ian and Eupheme. Eupheme is, in some way, a mysterious character that I found difficult to understand. Ian is clearly happily going along for the ride, and likes Eupheme, but whether she likes him back or not isn’t clear for much of the story. Gresham is something of what I’d call a “force of nature”, that is to say that she knows what she wants and gets it, and isn’t going to be stopped by anything or anyone. You almost wonder why the two are so close but then this is explained too as the story unfolds.

As a geek, I always feel when reading it that I can put myself in Ian’s place. He’s happy where he is, doing a job that pays enough for him to essentially exist, doing the things that he enjoys, and without too much interference from the outside world. And I can relate to it as I’ve aged and gained new experiences. For me, this is a very personal book, and I’ve always said that if you want to understand me, this book is a way to do that.

Whether this book is of interest to other people (especially those that aren’t geeks like myself!) or not I don’t know. I do think it’s also of interest because of the time it was written – as a book published just before the turn of the century it includes names of many of the popular celebrities around then, and on a technical level it’s before things like Facebook came on the scene. It’s entirely possible that the story wouldn’t work if it was set today. Or maybe it would – maybe Ian would wake up to find a tweet waiting for him from someone he met at a party the night before and realise how much he’d changed that way.

Mike is a blogger who writes in between sleeping, working, being a dad, and eating pizza. His blog can be found at http://thoggy.blogspot.com and you can also see him with his evil twin Joel at www.youtube.com/ravenswingthog.

Shy Tells Us All!

Young Movellist of the Year Winner!