Hey Guys!Today is my stop on the YANR Book tour for Propheticus by Emma Daley and you are here to read my review! Hope that you like it. To visit the other stops on the tour, I have included a list of the other blogs and dates at the bottom of this post. 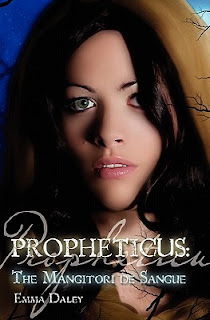 Summary: (from Goodreads)
There is something frightening about the way a hateful, unknown creature looks back at you. The way its beady red eyes snarl at you, and it’s cheek curls with a hiss to reveal the greedy canines beneath. It is one thing to dream of this beastly creature, and it is another to have it inches from your face, its warm ungodly breath on your cheek, and its pallid gray bones reaching to devour you. My name is Aniah, and once my world was safe. But like many others throughout the universe-and here on the planet Delucia-fate would have me meet with the Mangitori de Sangue; an ancient army of blood-lusting creatures who have been frightening and devouring the inhabitants of the universe for decades. My fate brings me deep into their world. In fact, it is written somewhere-and the stories have been told long before I was ever born-of a prophecy wherein a young woman with the heart and soul of an angel will lead the universe in a victory against the Mangitori de Sangue. I am that woman. I just have to stay alive long enough to figure out how.

four out of five stars
in the beginning
I haven’t read that many sci-fi novels in my time, it is one genre that I am still new to but I haven’t yet read a sci-fi story that I haven’t ended up really enjoying. Propheticus was a creative, moving and intriguing novel that really grabbed my attention. I loved the story and I was so focussed by the end of the book that I was left in a daze at the end wishing that I could continue reading. I need to know what happens next, I want to know more and spend more time with the characters and the planet. It was an inspiring read that lifted my heart and kept me interested throughout the book. It is one that I would easily re-read again and one that truly sets up the scene of what looks to be an intriguing series.
the structure holds
Aniah is such a strong, stubborn and amazing character. I loved how protective she was of her ma, and the way that she carried herself despite her loss and grief. I found her to be fascinating and I really just loved the way she acted around Novell. I felt attached to her and I found myself heart-broken during certain parts as I felt the way she did. She put so much of herself into things that when they went wrong it was hard not to feel hr pain. She was a great protagonist and one character that I am really looking forward to reading more about.
I adored Novell though. I think he really made the story for me. He was compassionate and caring, adventurous and on a mission to search for his family and I just found him absolutely thrilling. I loved seeing his perspective of things, especially how he felt about Aniah and just loved being able to see the two characters from different perspectives. I admired how he wanted to thank Aninah and her ma for their hospitality and I enjoyed his tales of his adventures. He was a really well-rounded character that I enjoyed reading about so much.
building it up
The relationship in this book was so adorable. I loved how it all came together and while I’m not a fan of insta-love, the way this relationship plays out and how they are with each other, I just found it so sweet. It was romantic and kind and you just couldn’t help but feel your heart pumping a little faster. It was a great sub-plot to what else was going on within the book and while at times I started to feel that the book was more romance than anything else, I certainly didn’t mind it!
I would say that the action doesn’t really start to get going until near the end. There are hints throughout the narrative that make you curious that you put in a memory bank to call on later but with the focus being mostly on the characters and their history and relationship, it is fair to say that it really isn’t that important to begin with. However, once that action is put to the forefront, it is such a riveting read. So much so that I was literally sitting foreword on the seat holding my Kindle closer to me trying to get closer to it all. The tension building was brilliant and so sudden and just really managed to take my breath away.
This brings me to the ending which totally left me wanting more, straight away. It wasn’t an ending that left you with just enough and the hint of something on the horizon, it literally left many questions unanswered and really manages to keep the reader entertained. I am certainly looking forward to finding out what is going to happen next! I sometimes find it irritating when books end like this but I think it actually works well in this book and I just hope that I get my hands on the second book soon so as to continue on this wonderful story.
and knocking it down
Unfortunately, while I loved the plot, the characters and the romance in this novel, I sometimes found the writing style to be a little annoying. At times things are repeated and it feels like the author believes the reader would have forgotten something that had been written in the previous paragraph and it irritated me slightly. Fortunately this doesn’t happen throughout the book and was something that I was able to look passed but it really put off a few times to the point that I would skim the next paragraph as it felt that it literally repeated itself just in a different way. Of course, this may be interesting for some readers but it did not bode well with me.
so it is said
All in all this was a fascinating read that I really enjoyed and was glad that I got the chance to read. The characters were enticing, the romantic subplot was heart-warming, the sci-fi worlds were thrilling and creative and interesting to read about and the plot was really intriguing and full of tension and curiosity, especially at the end. This book will leave you wanting more but I would definitely recommend it to anyone who loves sci-fi novels with romance and with an action sequence full of tension and mystery at the end. A brilliant read.
Faye

Behind The Blog – Animal Party

A Quiet Kind of Thunder by Sara Barnard

My Thoughts On… The Liar’s Daughter by Claire Allan