Today is my stop on the School Wars Blog Tour and I am here to support St Grizzle’s! I love Karen McCombie’s books and this one is brilliant!

Without further ado, here’s some more info about the book and then I have a stunning guest post from Karen herself! 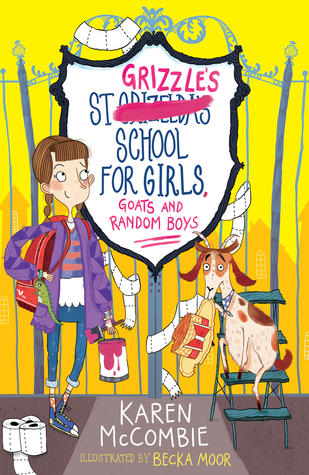 Hi I’m Dani and my mum loves penguins’ bums more than me. Otherwise she’d never dump me in some stuffy old school while she heads off to the Antarctic.

And it gets worse. When we arrive at St Grizelda’s School for Girls, the school’s had a drastic makeover. Gone are the uniforms, the rules and … er, most of the pupils and staff.

In their place is TOTAL CHAOS.

We’re greeted by a bunch of stampeding eight-year-olds, a head-butting goat and a crazy head teacher wearing a plastic-spoon crown…

Somebody get me OUT of here!

*Swoooop…!* That was the sound of me carefully side-stepping the obvious school story of them all (soz, JK). Instead, I have a smattering of new and old, serious and seriously funny school stories for your reading pleasure.
You’re welcome.

1 ‘Wigglesbottom Primary – The Toilet Ghost’ by Pamela Butchart
Pamela is the number one choice for this list, since she’s a) a very funny writer and b) sets most of her stories in school. I found it hard to choose between the excellently named ‘Baby Aliens Got My Teacher’, ‘My Headteacher is a Vampire Rat’ and ‘The Spy Who Loved School Dinners’, but in the end I opted for one of the ‘Wigglebottom Primary’ series. This is because Becka Moor did the illustrations for ‘Wigglesbottom’ as well as my newbie book ‘St Grizzle’s School For Girl’s, Goats and Random Boys’. (Yay!)

2 ‘A Little Princess’ by Frances Hodgson Burnett
Let’s go old skool with this riches-to-rags-to-riches tale of Sara Crewe, who finds herself deposited at Miss Minchin’s Seminary for Girls in London, while her dad is off fighting in the war. When he’s presumed dead, Sara goes from indulged, number one student to browbeaten maid in no time at all. Anyone who doesn’t gasp and “ooh” at the attic transformation scene is no friend of mine.

3 ‘Takeshita Demons’ by Cristy Burne
Miku has moved from Japan to London, and is rather taken aback when the supply teacher at her new school turns out to be a Nukekubi – a bloodthirsty demon whose favourite snack is children… *erk* Can she and her best friend Cait save her little brother from this flying-headed, otherworldly freak? They’d better!

4 ‘Drama’ by Raina Tegelmeier
‘Smile’ is a big favourite in our house, especially for a certain teen with braces. ‘Drama’ stars Callie, who joins the – no spoilers here – drama society at school. Another easy-read graphic novel choice that hits the spot in terms of friendships, crushes and school angst.

5 ‘Down’ With Skool’ by Geoffrey Williams and Ronald Searle
I think I discovered my battered copy of ‘Down With Skool’ during a teenage trawl of charity shops (my favourite Saturday afternoon occupation). It was Ronald Searle’s spidery, searingly sharp illustrations that caught my eye, but Geoffrey Williams’ irreverent take on life in posho boarding schools of the 1950s made me snigger madly. St Custards and Nigel Molesworth – what a wizard wheeze, chiz chiz.

6 ‘How To Write Really Badly’ by Anne Fine
American schoolboy Chester moves to Britian, and finds himself stuck in a boring classroom next to Joe, who struggles to write well. This very funny story trips along speedily, and is deceptively simple… the underlying message of appreciating each other’s different talents is told with a lightness of touch, as you’d expect from former Children’s Laureate Anne Fine. [Karen does a little curtsey.]

7 ‘Withering Tights’ by Louise Rennison
‘The Misadventures of Tallulah Casey’ is the mighty and much missed Louise Rennison’s follow-up to the ‘Georgia Nicholson’ series of books, and this is the first in the series. Tallulah has got herself a place at a performing arts school in the unlikely setting of the Yorkshire Dales. Expect a pacy read packed full of Louise’s trademark zingy and brilliant buffoonery.

8 ‘Maggot Moon’ by Sally Gardner
If it’s still sometimes an uphill struggle to be dyslexic in the school environment in these enlightened times, try being Standish, the central character in Sally Gardener’s stark and strange dystopian novel. Written off by teachers, bullied by fellow pupils, it’s only when new boy Hector starts at school that a little trickle of brightness enters Standish’s brutal world. Epic, but you might need a lie-down and a sugary tea after reading this.

9 ‘I’d Tell You I Love You But Then I’d Have To Kill You’ by Ally Carter
Cammie Morgan is a spy-in-training at the elite Gallagher Academy for Exceptional Young Women. Still, it’s all well-and-good to know fourteen languages and how to kill a man in seven different ways, but how does a not-so-average girl cope when she starts to fall in love with an ordinary boy? A fast and fun read in the ‘Gallagher Girls’ series, and scores highly in the Awesome Title Awards (which I’ve just invented).

10 ‘Beswitched’ by Kate Saunders
Modern-day schoolgirl Flora Fox suddenly finds herself zapped back in time to the tight-laced 1930s St Winifrid’s. Lots of gorgeous period detail envelope the reader as Flora struggles without her 21st century accoutrements, but with her new retro girl crew of Dulcie, Pogo and Pete. A totally enjoyable time-travelling romp.

Karen McCombie has written over 80 books full of endearing characters and quirky humour; her series Ally’s World has sold over 200,000 copies. Born in Scotland, Karen now lives in north London. Karen loves her job, but is a complete fidget. She regularly packs up her laptop and leaves Office Number 1 (her weeny back bedroom) and has a brisk walk to Office Number 2 (the local garden centre café).

The Dry by Jane Harper

A Day Without Speaking