Today I am here to welcome Nick Bryan on the blog to talk about writing and self-publishing a series. It’s a great post that I hope you both enjoy and find informative!

Serial Self Publishing – How Was it the Third Time Around?

Hi, I’m Nick Bryan and I write the Hobson & Choi series, mismatched detective duo crime novels in which an experienced detective and his teenage intern investigate cases. They take place against the backdrop of a London in which crime seems to lurk behind every business and institution.

The third book came out in early October, meaning I have now self-published a novel more often than many will have a child, get a degree or climb a mountain. So, have I learnt anything from this experience?

This probably isn’t exclusive to indie publishing, but the problem with writing heavily serialised books (which Hobson & Choi definitely is) is that with every new one, the pool of potential buyers shrinks. The only people I can ethically say ‘should’ purchase the third H&C are those who read the first and second.

Unless you’re just doing it to give me money and pad my stats, in which case… well, I’d rather you read the things, but won’t stop you. Point being, unless you get to a national success level, your sequel-specific marketing campaigns get smaller and shorter each time, then you go back to plugging book one again. It’s an annoying but necessary realisation.

Of course, writing a series is one of the reasons I’m self-rather-than-traditional-publishing this project in the first place. I grew up on series of books/comics/TV shows and always want to do the next chapter. It’s not sensible to write heavily serialised sequels if you don’t know the first one will be published, and since the H&C series ran for a long time on a serial fiction site anyway, I figured I could continue them that way. Nice to write more stories rather than get stuck on endless origins like the superhero movies.

It was also a deliberate choice to stop these books getting mega-long, so I can keep continuing the series whilst working on other stuff at a decent pace.

Going into more detail for a second – in order to save money (and because I’m enough of an IT-person to find it easy-ish), I do a lot of the technical aspects of self-publishing myself. I can do the HTML, I have help with proofreading, there are loads of walkthroughs online if I get stuck. As you’d expect, the tech tasks get easier after a few repeats, especially as the H&C books (being a single series) all look the same, so my templates and stylesheets get re-used.

However, I’ve found myself fighting off a certain amount of complacency on this third attempt. The first one was an epic struggle, the second seemed easy in comparison and as a result, I perhaps over-assumed the third one would be simple. Ended up having to go back and correct a lot of stuff. Learn from my mistakes, everyone. Don’t get smug, it’s not worth the damn tedium.

Still, self-publishing is fun, you learn a lot. More lessons all the time, which I hope to take on through to the next one. Less smugness for book four! In the meantime, the first three books of the H&C series are out now in print and digital, the first one is currently free in ebook, and if you give them a try, you’ll make a simple boy very happy. Thanks!

I personally love the Hobson & Choi series, and you can read my post here where I detail the ten reasons why I think you should read the series! 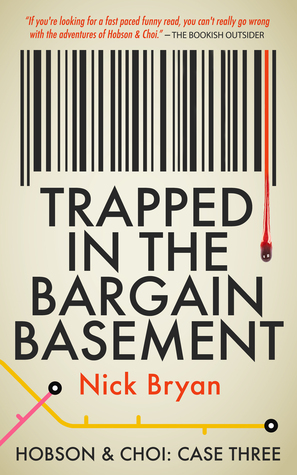 Angelina Choi returns for her final day of work experience at the Hobson Agency – is there a job waiting afterwards? Should she walk away for her own good?

While she mulls it over, they’re hired by the massive EastVillage shopping centre to investigate a spate of muggings. But do the management know more than they’re letting on?

As Hobson and Choi wrestle with commercialised corruption, will Angelina finally squeeze in her first date with Will the Hot Receptionist? Can anything emerge from the smoking crater of Hobson’s love life?

Trapped In The Bargain Basement plunges grimly comic London crime series Hobson & Choi to new depths, after climbing to #1 in Dark Comedy on Amazon and breaking records on Jukepop Serials.

Book Review; The Secret by the Lake by Louise Douglas