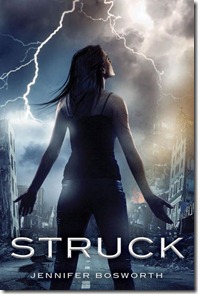 Mia Price is a lightning addict. She’s survived countless strikes, but her craving to connect to the energy in storms endangers her life and the lives of those around her.
Los Angeles, where lightning rarely strikes, is one of the few places Mia feels safe from her addiction. But when an earthquake devastates the city, her haven is transformed into a minefield of chaos and danger. The beaches become massive tent cities. Downtown is a crumbling wasteland, where a traveling party moves to a different empty building each night, the revelers drawn to the destruction by a force they cannot deny. Two warring cults rise to power, and both see Mia as the key to their opposing doomsday prophecies. They believe she has a connection to the freak electrical storm that caused the quake, and to the far more devastating storm that is yet to come.
Mia wants to trust the enigmatic and alluring Jeremy when he promises to protect her, but she fears he isn’t who he claims to be. In the end, the passion and power that brought them together could be their downfall. When the final disaster strikes, Mia must risk unleashing the full horror of her strength to save the people she loves, or lose everything.

Struck is a book that really threw me. I loved it, it was so much fun to read, it was enjoyable and interesting. I also didn’t like it. That, there, is my dilemma. I finished the book a fair few days ago now and it has taken me this long to get my head around the book to really contemplate how I felt about the book, and yet still, I sit here, not sure how to really write this review. It has occurred to me, however, that the reason I feel so unsure about this book was the ending. It just didn’t do it for me. It felt, in my opinion, a bit like the end of the seventh Harry Potter, the little ‘epilogue’ that just seemed unnecessary. I personally think that this book would have been perfect if it had ended before the epilogue. It didn’t need the end, and I feel that it ruined the mood of the rest of the book, which is extremely annoying because the rest of the book was brilliant.

The first thing that really needs to be mentioned is just how powerful this book is. It’s not a light-hearted read, but one that is full of punch, and I have to say, that is why I liked it so much. It wasn’t your typical YA that is covered in triangles and love romances, it is something so much more than that. It does have its romance in it and I will get to that in a bit, but yes, this book is not for those of the light-hearted. I would also warn people about the religious aspects of this book. I personally loved it, I loved seeing it set out like that and understanding that this is what happens, especially when the world is set out to end, but I know with certainty that this will not be everyone’s cup of tea. The religion is heavy in this book, I feel that strong Christian’s would not wish to read it and maybe even firm Atheists, but anyone in between should be fine, I would hope! I, for one, am an atheist and, like I just mentioned, I loved it, and found the Religious aspect to be right on par and to be a rather interesting view of it all. But, I also believe that anyone can have their faith and if that is what helps them in life, than good for them, so this may also be why. But yeah, just a warning on the religious front anyway.

The concept of Struck is definitely unique and equally compelling. It was so interesting to read a story about a girl who was simply obsessed with being struck by lightning. But I also loved the world that Jennifer created. It felt perfect, it felt real. I have never been to Los Angeles myself but from what I’ve seen I can imagine exactly what Jennifer was trying to say about the place. Tentville was one of the most spectacular pieces of imagery in the story and I loved it, it tugged at my heartstrings and I just fell in love with this world. I also loved the idea of the energy, the spark of the electricity, the undercurrent under the pavements. It was imaginative and creative and just really brought this world alive. There is nothing but glowing recommendations from me for this concept, a brilliant dystopian world.

I found Mia to be a slightly annoying protagonist at times, she didn’t really flow well for me during some parts but the rest of the time, she was perfect. I loved how she felt about her family and how she acted around Mr Kale and Katrina. Her story about why they moved to Los Angeles is also heartbreaking and I found it really brought Mia to life for me, so it was a shame that it wasn’t something that was shed to light straight away. I understood that she wanted to take her own path, she didn’t want to constantly have to decide which way to go and she certainly didn’t want to leave her life to fate, or destiny and I really liked that about her. All in all she had a few flaws but she was a rounded person who was easy to read and get behind.

The romance in this novel, however, I just couldn’t get behind. It may be known by now, but I have issues with romances in novels and am a bit… negative when it comes to them not being just right, in my book. I don’t like it when relationships seemingly spring up from the blue and unfortunately, this is what happened in this book. I totally understood why Jeremy was fascinated with her, I understood that he was infatuated with her so soon but I honestly just didn’t understand why she liked and trusted him so soon, especially after how he treated her when they first met. It seemed to me that she was only after him for the same reason she was after lightning, she was obsessed. That, for me, just didn’t hit the right bone, unfortunately.

The ending. Ah yes, the ending. First of all, I will admit again that I do love this book, I loved the two sides, the middle and the in between that Mia has to deal with but by the end of the book, I was left a little stumped. In all honesty, by the end (before the epilogue), I was still confused as to what had really happened. It seemed both sides wanted her to be where she ended up, but both believed something different would happen, or something. It was slightly confusing, or maybe I was just tired when I read it that I didn’t quite understand. Then there was the epilogue and I was certain that it would help to explain what had just happened, but unfortunately it didn’t. The tone of the epilogue is actually so different from the rest of the book that I couldn’t get my head around it. I felt that with it being so different in atmosphere and mood, it just brought the entire book down. It was sort of like there was a happy ending, after the happy ending and it just confused me slightly I suppose.

Despite how this review looks, I did really enjoy reading this book. It is one that I would happily pick up again. It was easy to read, it was quick to read and it was truly enjoyable. The world was delightful, the characters were easy to get behind and it was just interesting and imaginative. It was a book that I had been waiting to read for months and one that truly delivered when it landed on my doorstep. If you’re looking for a YA dystopian novel that is something new and exciting, then Struck is the book you’re looking for and I recommend you go and get yourself a copy.

Pet Peeves? How About Rational Irritations?

The Awakened by Julian Cheek