Hey Guys!
Every fortnight, Aidy from Aidy’s Reviews and I exchange reviews to cross post on our blogs. He writes a film review for my blog, and I write a book review for his blog. Today, Aidy, has written a review of Take My Eyes (2003) for you and I wrote a review of Unearthly by Cynthia Hand, which you can find on his blog. Here is his review! 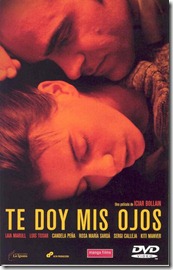 Take My Eyes, is a foreign romantic drama directed by Iciar Bollain and jointly written by Iciar Bollain and Alicia Luna. Laia Marull and Luis Tosar are the stars of the film, portraying Pilar and Antonio; a couple where the wife is the victim of spousal abuse but cannot shake the feelings of love she harbors towards him.

The film opens with Pilar rushing around her apartment to wake her son and fetch essential items. Pilar (Laia Marull) and her young son escape to her sister Ana’s (Candela Pena) home. Not too long after she arrives, she suddenly bursts into tears, still in her slippers. While in such a hurry to leave home before her husband returned, Pilar had no time to dress herself. Ana decides to head back to their home in order to salvage the remainder of their clothes. In the apartment, she discovers documents from the local hospital detailing her sister’s injuries. Antonio arrives and sees Ana packing and realizes Pilar had taken off with their son.

Antonio (Luis Tosar) decides to visit his wife at her sister Ana’s home. She only cracks the door just a little in order to speak to him. Antonio showers her in compliments, apologizing for his actions and promises he will change; all the while she shakes in fear. When he does not receive welcoming responses from Pilar, he begins to again, threaten her, revealing his true nature. The couple desires to save their marriage, as their love is still strong for each other.

They are soon back together, and it seems their relationship is flourishing; Antonio started attending therapy for spousal abuse, and Pilar took up a part-time job as a cashier and a museum tour guide to take care of her living expenses. Pilar’s journey of self-discovery had led her to an epiphany–she didn’t need her husband ruling over every single aspect of her life. She is now living an enjoyable life full of friends and a job she relishes. She then comes to see she has become fed up of Antonio’s overbearing presence.

One of the more poignant scenes in the film is when Antonio comes home from work and sees Pilar getting ready for her shift. He strips her down to her bra and pushes her out onto the balcony for passerby’s to see. She pleads with him to be let back indoors. He then snatches her by the throat to bring her inside–she is petrified with fear and urinates on herself and on the floor of the apartment.

The movie spotlights the events surrounding Pilar but comes up short showcasing the more prominent aspects of her personality. Instead, the film reveals more about Antonio; he is mocked by his family and his father has a bias towards his brother. At work, he is just a low-end salesperson with a poor salary. The audience discovers the root of his issues and why he takes his anger out on his wife. However, no personal information about Pilar’s characters other than she has a son, sister, and what she is subjected to in the abusive relationship.

Take My Eyes offers a painful glimpse into aspects of an abusive relationship. The highlight of the film is the believability; we personally may or may not know of someone in a similar situation. Bollain’s brilliant script brought us into the viewpoint of the victim and leaves a lasting impression upon the viewer.