Today I’m here to highlight a really intriguing sounding book for you all. I am super excited to start reading this and finding out what it’s all about!
So, without further ado… 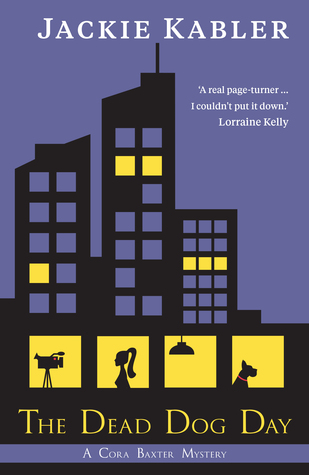 When your Monday morning begins with a dead dog at four a.m. and a dead boss by ten, you know it’s going to be one of those days. And breakfast TV reporter Cora Baxter has already had the weekend from hell, after the man she was planning a fabulous future with unceremoniously dumped her.

Now Cora’s much-hated boss has been murdered, and Cora is assigned to cover the story for the breakfast show – but as the murder enquiry continues, the trail of suspects leads frighteningly close to home. Why is Cora’s arch-rival, glamorous, bitchy newsreader Alice Lomas, so devastated by their boss’s death? What dark secret is one of her camera crew hiding? And why has her now ex-boyfriend vanished? The race to stop the killer striking again is on …

Jackie’s novel is the first book in a new series, and she draws on her experiences of the glamourous world of television, as well as her long-standing love for crime fiction. A popular broadcaster turned author, Jackie is now a presenter on QVC, and as well as a decade on GMTV, has also worked for BBC News, ITV News and Setanta Sports News.

“A twenty-year career in news during which I covered hundreds of major crime stories has given me a wealth of material to draw on for my novels. Aside from the actual murders, everything else that happens in this book actually happened to me as a breakfast TV reporter – with minor details changed to protect identities, of course…”, says Jackie Kabler.

Blog Tour: Out of Orbit by Chele Cooke