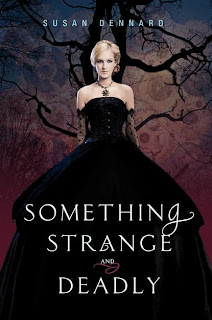 There’s something strange and deadly loose in Philadelphia…

Eleanor Fitt has a lot to worry about. Her brother has gone missing, her family has fallen on hard times, and her mother is determined to marry her off to any rich young man who walks by. But this is nothing compared to what she’s just read in the newspaper—

The Dead are rising in Philadelphia.

And then, in a frightening attack, a zombie delivers a letter to Eleanor…from her brother.

Whoever is controlling the Dead army has taken her brother as well. If Eleanor is going to find him, she’ll have to venture into the lab of the notorious Spirit-Hunters, who protect the city from supernatural forces. But as Eleanor spends more time with the Spirit-Hunters, including their maddeningly stubborn yet handsome inventor, Daniel, the situation becomes dire. And now, not only is her reputation on the line, but her very life may hang in the balance.

Why?: Uuuuh… it sounds AWESOME. And I mean… come on… ZOMBIES! Hehe. I really do just think this sounds brilliant and one that I am looking forward to reading. And the cover is really pretty too, isn’t it? :D hehe.

———
Title: Extremely Loud and Incredibly Close
Release Date: 17th Feburary 2012 (UK)
IMDB: Link
Directed By: Stephen Daldry
Why?: I kind of cheated this week again and chose a film that is nearly out but I couldn’t help it because this film just looks amazing! It seems like it’s full of rich emotion and it just looks brilliant. I can’t wait to get to the cinema to watch it! :D
what are you waiting on?