Today is my stop on the Coming Home to Holly Close Farm blog tour and I am pleased to welcome Julie Houston on to the blog with a quick interview! She’s come up with some wonderful answers!

What is your favourite thing about writing books?
The end!! No, seriously, it’s the bit when you’re about three-quarters of the way through writing a novel and you’re so excited because you know exactly where it’s going and there’s no stopping you reaching that finishing line. It’s a really marvellous feeling, making you get out of bed at 5am – a bit like Christmas morning when you were a kid – because you just have to get your hands back on it.

Who is your favourite character in your book and why?
I actually really like both the sisters Daisy and Charlie. Daisy is a lot more laid back and happy to take life a day at a time, whereas Charlie is a worrier. I know a couple of reviewers have found Charlie a bit full of herself, but it was really my intention to show that she had to be strong and get on with life after the awful shock of finding she’d been living with an adulterous married man and, as a result, out of nowhere, losing both her job, relationship and home. I have a lot of sympathy for Charlie – she had absolutely no idea Dominic was married with children – and she has to start again from scratch which is never an easy thing to do.

What is your favourite drink to consume while writing?
Coffee and gallons of it!!

Do you have any bad habits while you’re writing?
I’m afraid so. I can’t resist opening emails and messages as they float onto my screen while I’m writing. If I knew how to turn off notifications, I’d be able to stop prevaricating. I’m not sure if it’s a bad habit, but I wish I could just write, letting the words flow, instead of constantly re reading what I’ve just written, polishing a paragraph as I write rather than going back to it at the end of a writing session.

How do you research books?
There was a lot of research for Coming Home to Holly Close Farm because much of the content is set during WW2. I read book after book about the WAAFs and Bomber Command, making notes as I went. I also revisited old newspaper articles about the murder at a local farm that my husband and I wanted to buy years ago and which had very much sown the initial seed for the book.

Are you a plotter or a pantser?
Both. I’m much more of a plotter, now that I’m on to my seventh novel. Because certain characters do turn up again and again – ie Harriet, Grace and David Henderson – I have exercise books full of characters including their family trees and how they are related to each other. Fictional Westenbury is a very large village in the small Yorkshire town of Midhope and I have to be careful I don’t end up marrying someone off to their cousin – or grandson!
However, I do find sometimes my best writing happens when I do just that – write, flying by the seat of my pants. Ideas crowd into my mind and the computer keys take over. Gosh, did I write that?

If you could live in any fictional world, which would you choose and why?
Probably Jilly Cooper’s Rutshire, and then I could meet Rupert Campbell-Black in the flesh rather than on paper.

If you could befriend any fictional character, who would you choose and why?
Oh, there are so many. Almost impossible to answer. As a child I wanted to be friends with Katy in “What Katy did.” I re-read “What Katy did at school” only a couple of weeks ago on a long-haul night flight and it just confirmed why I’d always liked her. I’d love to meet her now, when we are both adults.
Also, possibly, Elizabeth Bennett in Pride and Prejudice. I could visit her at Pemberley – if it was anything like Chatsworth in Derbyshire, she’d be worth having as a mate. I’ve always wanted to know if the marriage was really successful. Did she really fancy him or was it just Pemberley that swayed her into accepting his proposal? (Forget Colin Firth and that wet shirt – it’s the book we’re talking about, not the film!) 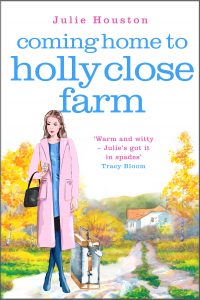 Charlie Maddison loves being an architect in London, but when she finds out her boyfriend, Dominic, is actually married, she runs back to the beautiful countryside of Westenbury and her parents.

Charlie’s sister Daisy, a landscape gardener, is also back home in desperate need of company and some fun. Their great-grandmother, Madge – now in her early nineties – reveals she has a house, Holly Close Farm, mysteriously abandoned over sixty years ago, and persuades the girls to project manage its renovation.

As work gets underway, the sisters start uncovering their family’s history, and the dark secrets that are hidden at the Farm.

A heart-breaking tale of wartime romance, jealousy and betrayal slowly emerges, but with a moral at its end: true love can withstand any obstacle, and, before long, Charlie dares to believe in love again too… 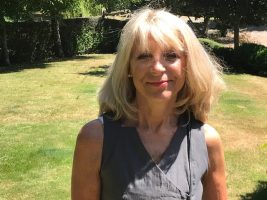 Julie Houston is the author of THE ONE SAVING GRACE, GOODNESS, GRACE AND ME and LOOKING FOR LUCY, a Kindle top 100 general bestseller and a Kindle #1 bestseller. She is married, with two teenage children and a mad cockerpoo and, like her heroine, lives in a West Yorkshire village. She is also a teacher and a magistrate.

My Thoughts On... The Love and Lies of Ruhksana Ali by Sabina Khan

All We Could Have Been by T. E. Carter

My Thoughts On… Letting Go by Cat Clarke