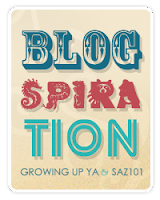 Blogspiration is a weekly meme hosted by GrowingUp YA & Saz101. This meme was created to help spark inspiration among bloggers, readers and writers alike. An inspirational quote/picture/video is posted weekly, on the day of the authors choosing, so that it may inspire creativity, conversation & just a little SOMETHING.

It’s been a while since I’ve done one of these on a Sunday, (I know, it is terrible!) But I am jumping back on the bandwagon this week! In relation to the 15th Anniversary this week, my blogspiration is going to be all Harry Potter related. (Are you as excited as I am?)

First up, I trawled through the internet and found some great graphics to feature, and then there’s a little ‘inspiration’ paragraph at the bottom.
ENJOY! The Harry Potter Series has become such a huge phenomenon with such a large fanbase that it is impossible not to be inspired by it. When I was just ten years old, I begged my mum to buy me the first three books when I read about them and ever since I read the first book, I was absolutely hooked. They have been with me every step I took in my life and I always loved waiting for the next book to arrive, or the next film. They were amazing stories that I never wanted to end. (*big tear*)

The best thing about Harry Potter though is the fandom. J. K. has managed to inspire so many people but, as you can see from the graphics above, the fans themselves are just as inspiring. I can only imagine how overwhelmed she must be by all of the creativity and inspiration that fans have fuelled into her original stories. It must feel absolutely amazing.