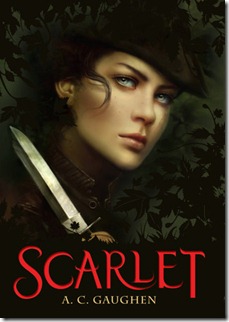 Many readers know the tale of Robin Hood, but they will be swept away by this new version full of action, secrets, and romance. Posing as one of Robin Hood’s thieves to avoid the wrath of the evil Thief Taker Lord Gisbourne, Scarlet has kept her identity secret from all of Nottinghamshire.
Only the Hood and his band know the truth: the agile thief posing as a whip of a boy is actually a fearless young woman with a secret past. Helping the people of Nottingham outwit the corrupt Sheriff of Nottingham could cost Scarlet her life as Gisbourne closes in.
It’s only her fierce loyalty to Robin—whose quick smiles and sharp temper have the rare power to unsettle her—that keeps Scarlet going and makes this fight worth dying for.

We Steal
The legend of Robin Hood is a story, myth, legend, that I have always adored. I love every adaptation that I have ever read or watched, some more than others, and so when I first heard about Scarlet, I knew that it was a book I simply had to read. It is also the reason that I opened it up carefully and cautiously, what if I didn’t like it or it just simply didn’t lead up to my expectations? Fortunately, this book exceeded my expectations and is competing to be one of my favourite adaptations of Robin Hood. I loved the idea of Will Scarlet actually being a woman in disguise, but it was the writing style and the overall feel of the book that truly had me hooked from beginning to end. I am incredibly glad that I took a chance on this book, and am simply ashamed at how long it actually took me to pick the book up.

From The Rich
The plot of this adaptation was really interesting. It had most of the main characters, though some were different in personality. It had a lot of the main plot aspects too, but just carried out in a different way. I was truly compelled by this story, there is no better way to describe it. I loved the way that Scarlet was portrayed, how strong she was and how much she was determined to not be seen and treated like a lady. I adored the way that the events unfolded, and while I guessed early on at some of the twists and revelations, I still loved the way it all came out in the end. There was never a moment of dullness in the story, there was always something going on, something to keep you needing to read more and this only helped to keep my attention riveted.

A few aspects of the plot did, however, irritate me. But, fortunately, even these small things never fully put me off the book. It was a powerful and captivating read and I completely understand that making a book perfect for everyone is an incredibly difficult, and most likely impossible, task to do. The one flaw that really stuck out for me, however, was the love triangle. I didn’t like it at all, but I’m generally not a fan of love triangles anyway so that is really more of a personal preference. The reason I disliked this triangle is because it irritated me, but if I say too much I’ll ruin it. There was just one character that I wanted to just back off but he didn’t seem to get the message. I do see how this was in his character and was quite important for Scarlet to realise who she really loved, but it still irritated me. I am certain that this part of the book will probably be liked by others though, so it may just work for you.

To Feed Only
If you cannot tell by now, I adored Scarlet. She was a strong, feisty, protective and caring character that I couldn’t help but root for throughout the book. It was great to read her story and I just loved her story and everything that she stood for. In a way, her character did say a lot about feminism but that isn’t something I want to flood my review with, but I may say something about it in another post at some point. I admired Scarlet and everything that she did. She was the true embodiment of what I imagine Robin Hood’s merry men to be like, it was always for someone else, never for herself. Her personal story, as it came to light at the end of the book, was not a surprise to me but I love how it explained so much and how she never stopped looking after others ahead of herself. She is the kind of character that I would love to be one day.

I also really liked Robin in this adaptation, or Rob as he was known in the book. He was protective, he worried, he was strong and he was a true leader. I liked reading about his journey through Scarlet and I admired him completely at the end of the book. He never showed weakness if he could help it, and he was constantly putting Scarlet and his men before his own skin. John was a character that I wasn’t particularly fond of. There were times when I liked him and the things he did, he was charming and friendly when it mattered but I just didn’t get a brilliant vibe from him. But the most adorable of the merry men was definitely Much. He was the youngest, aside from Scarlet, and newest and he was physically weak but strong in the soul. He gave my heart a little thump and I just truly found him to be a great character that I truly enjoyed reading about.

The Starving
Scarlet is a debut novel by A. C. Gaughen, but I for one am looking forward to reading more novels by this author as the writing style was one of the first things that truly entranced me. I fell in love with the way the words were formed on the page, the way the plot was re-formed to suit the needs of the story and how, through it all, I could still feel all of the life and action that I get from every other Robin Hood adaptation. There was action, there was romance, there was humour, and there was the dark, dreary parts too. Gaughen has truly managed to capture my heart with this novel and I really want to see if her other novels will continue to be brilliant in style, forcing the reader to continuously turn the page and leave the real world behind. The description was vivid and created perfectly formulated images of the world in my mind so that I could travel into the page completely. It is an admirable talent.

We’re Merry Men
All in all, if you haven’t worked it out yet, Scarlet is a book that I absolutely loved. It brought me back to my roots with all of the robin hood adaptations, it made me imagine what would happen next before pulling the carpet out from under me and placing something else there instead. It was a sparkling, marvellous adaptation that I really do hate myself for not reading earlier. With a strong heroine, magnificent secondary characters and a romance that isn’t too ‘in-your-face’, this book is one that many readers will enjoy. It flirts with danger and brings you ever closer to that heart-wrenching moment when things go terribly wrong, but this novel was a true inspiration and as I said earlier, fighting to be one of my favourite Robin Hood adaptations. I would recommend it to other lovers of all things Robin Hood, but also to people who don’t know them well as this will really test the waters for you. Hopefully you’ll find yourself enjoying the adventure as much as I did.

** I received this copy from the publishers in exchange for an honest review. I was not compensated nor was I required to write a positive review. **