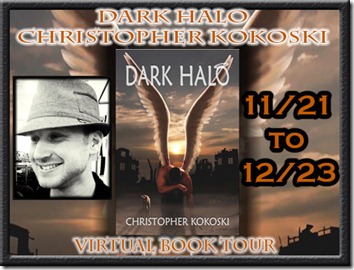 Hey Guys!
So today I am introducing you to the talented Christopher Kokoski, author of Dark Halo.
As part of his book tour, I have a review of his book for you all! For all the other tour stops, click here.
Hope you enjoy it! 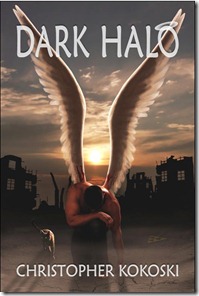 In a town besieged by shadowy, demonic forces, a father races against time to save his family.

Thirty-five-year old Landon Paddock has deserted his wife and daughter, abandoned his business, and secluded himself in his late parent’s southern Indiana ranch. But he’s barely lapsed into a drunken coma when a mysterious, winged stranger appears during a violent lightning storm, chasing him out into the maddening night with his estranged 15-year old daughter.

As layer after layer of reality is dissolved by a series of violent encounters, the only way to survive might be for Landon to band together with the family he destroyed to make one last stand against a sinister army of unthinkable magnitude.

Disclosure of Material Connection: I received this book for review fromFirst Rule Publicity from the author as part of a virtual book tour. I was not compensated nor was I required to write a positive review. The opinions I have expressed are my own. I am disclosing this in accordance with the Federal Trade Commission’s 16 CFR, Part 255: “Guides Concerning the Use of Endorsements and Testimonials in Advertising.”

The Storm Rages
Recently I have been reading a lot of horror-type books with revolting creatures, heart-racing scenes and moments that have the ability to take your breath away. It is a genre of books that I have always loved but not one I have read for a long while. So, when I heard about Dark Halo, I knew that it was one I would enjoy and would want to share my thoughts with you. Fortunately, this book had everything I could have wanted from this genre and by the end of the story, I found it incredibly difficult to put the book down. It is full of action, full of tension, and has some really powerful messages hidden within it as well. It is a book that kept me entertained and I would easily recommend others to read it. Carry on reading to find out why.

Opening Cracks
This book is action-packed from the very first sentence. Christopher Kokoski wastes no time at the beginning to pull the reader into the story, enticing them with more action and tension. The book never gives the reader a moment to pause, there is always something going on. Whenever it feels like the characters may have a reprieve, a moment to sort through everything going on, something else will happen and force them back to the situation at hand. It was a brilliant way of writing the book and really kept the reader interested in the story, it is impossible not to keep turning the page and finding out how they would get themselves out of the scrape. And, even by the end of the book, the reader is not fully sure how, or even if, the characters will get themselves out of their predicament. The plot leads itself to excitment, tension, fright, horror, and a sense of cheerleading; you want it all to work out.

Letting Them Out
There were a lot of characters in this book, but they were all really well written and felt real enough to let the story wash over you. Landon was a character with strength, he had something worth fighting for and he wasn’t going to stop until it was all over. He was passionate, caring, and he had a lot to shoulder but he managed it all. There is no denying his weaknesses either, however, a past of loss lead him to alcohol and resentment and these issues creep up from time to time within the book but also help to spur him on. It was hard not to want his character to come out on top as he had fought so hard throughout the entire novel.

Frank and Gina were my favourite couple in the novel, you could clearly see how much they adored each other and had for so many years. They felt so real, and strong, stubborn but reluctant at the same time. It was brilliant to read about them. Lucy was a character that I wasn’t sure about to begin with but by the end I admired her a lot. She never backed down, stood her ground, even when fear was creeping through her entire body. She was protective and loving, and nothing could have stopped her. Katie, on the other hand, was the one character that I had the most problems with. I think what irked me the most was her age, she didn’t feel like she acting like a fifteen year-old would, and there also didn’t seem to be any repercussions to the things that happened to her, or that she did, and that just didn’t sit right with me, unfortunately.

So We Must
If there is one thing that I truly liked about this book, it was the demons and angels and the way that they were predicted. I liked the way that Christopher made the demons arrive in all shapes and sizes, the way he described what they were like and how they looked. I also enjoyed the scenes where they spoke out, using their evil-taunting ways to do what they do best. It was unique, interesting and I got a really good idea of what the images looked like. The angels were also really brilliantly described, from the way they spoke, to their actions and commands, I found myself believing in their characters. It was very much as I would imagine angels to be, if I believed in them.

Defend Ourselves
Unfortunately, this book was not without it’s flaws. While it was gripping and enticing, there were moments within the book that I simply didn’t like. I noted a few times that some of the descriptions were lost on me as they were pitched for an entirely american audience – I have no knowledge of american football, for example. Of course, I understand that this is simply a culture issue and is not a problem everyone will have with the book. I also struggled with the ending, a lot was happening and I often found myself re-reading parts, struggling to remember what was happening and where they were – but I also read it at three in the morning so that probably didn’t help! But I just feel that it got a little bit confusing towards the end which is unfortunate because the rest of book was clear and concise. Fortunately, however, neither these flaws, or the other small nitpicky things I found, hindered away from the reading experience and I was still able to truly enjoy the book.

From Everything
Overall, Dark Halo is a book that I almost read in one sitting, It kept me captivated, entertained and almost literally holding the edge of my seat. My eyes were alert, my heart-race quickened and my eyes couldn’t read the words on the page quick enough. It is a book that I would easily recommend to people who enjoy tension-filled books with interesting dark creatures, or those that enjoy books with wars, especially wars between demons, angels, and humans. It is a well-written novel that I am especially glad I went ahead and read and am also glad to have been given the chance to share my thoughts of the book with you. So if you think this is a book you would also enjoy, why not go ahead and get a copy!

four out of five stars 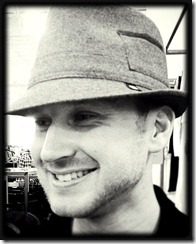 Christopher was born in Kansas, the son of an Army Ranger and Black Hawk pilot. He grew up in Kentucky and Germany, and graduated from Murray State University in 2002 with a degree in Organizational Communication. He spent the next three years laboring over his first book, Past Lives, while getting married to his college sweetheart, having a beautiful daughter, and more or less finding his stride in life.

He currently lives in Southern Indiana and works in Louisville, Kentucky as a national trainer. He has presented at local and national conferences on a wide spectrum of topics including communication, body language, cultural sensitivity and influence. Other notable activities include writing articles, short stories, novels and training materials for national and international audiences.

Christopher continues his passion and dedication to writing by working on additional novels, including a sequel to the Past Lives series. His most recent book is the standalone paranormal thriller, Dark Halo.

Dark Halo is currently FREE on Amazon until December 5th! Get your copy NOW!

On a final, unrelated note, I am in the middle of a fierce competition and could do with all the support I can get! If you have just a minute to spare and would be happy to watch a short vlog I created, I would truly appreciate it! And if you could comment on it or pass it along, I would be even more appreciative!