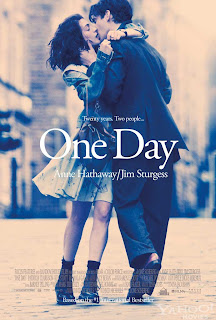 This book, recently adapted into a film, is one that has taken people’s hearts by a storm. The story is that of two people who meet for the first time on their graduation night. It follows their lives over the next two decades, only ever giving the reader an insight on what happened on the 15th July of every year. It is unique in it’s style and perhaps it is for this reason that the novel is so very popular for it is one of those stories that keeps you gripped and wanting to come back for more.

Emma Morley, played by Anne Hathaway, is an intelligent woman who wants to change the world by simply changing the area around her. This is something she hoped to achieve but as we travel through the years with her, we wait with abaited breath for her to finally achieve something in her life. And then, one fateful day, it all happens for her and everything seems to be going right. By the end of the story, she does manage to change the world, just not in the way she wanted. Or rather, not the world she thought she wanted but changing Dexter’s life, ultimately changed hers.

Dexter Mayhew, played by Jim Sturgess, is a party animal whose goal in life is to live life to it’s fullest. This he believes he does while he gets a presenting gig on television and spends his times in clubs getting drunk and high. It is a side of Dex that Emma finally can’t deal with and so their strong friendship eventually shatters. However, as the story continues, one may soon realise that what Dexter really wants in life is to matter to someone and to make somone else’s life worth living and this he does eventually achieve, even if he’s not fully aware of it himself.

The story is full of bumps and crashes, happy moments and tear-jerking moments that allow the reader to be pulled face first into a believable and enticing world. One Day is a book that shows how a simple incident could change your entire life and many different incidents intertwined together are what makes life interesting. It is a story that, when placed upon screen still brings forward amazing messages of friendship, love and life. An interesting read and one that is definitely recommened.

The film of the novel, unlike many adaptations, is extremely true to the book but this may, in large part, be due to the fact that David Nicholls wrote the screenplay for it. However, Anne Hathaway plays Emma Morely extremely well and really brings her into a truly believable character and the on-screen chemistry between her and Jim Sturgiss is simply beautiful to see. Jim Sturgiss also played Dexter Mayhew extremely well and really brings the character to life with his many flaws but also with his incredible strengths that hide beneath the surface. It is a film that will bring the audience to tears as the moments from the book appear on screen for everyone to see.

All in all, One Day is a book and a film that should definitely be read and watched as it’s not something you’ll ever want to miss.

My Thoughts On… Mooncakes by Suzanne Walker and Wendy Xu

My Thoughts On… Dino Knights by Jeff Norton