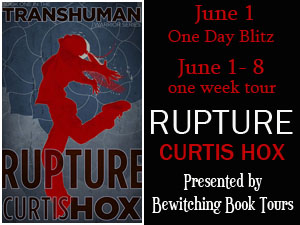 Genre: YA Dystopian Fantasy
Simone Wellborn is a Transhuman with an attitude. She’s been genetically engineered from birth to be super smart. The problem? All that tinkering her parents paid top dollar for provided a few unexpected results, like an annoying ability to blast telekinetic energy at the worst possible times. She also has another tricky issue: strange entities possess her and, worse, transform her into something dangerous.
Simone’s mother sends her to the Sterling School for reject Transhumans. While there, she meets a few other students with similar problems. They’re all Transhumans with dirty secrets. Heartthrob Hutto Toth is a charming gladiator. He annoys Simone from day one, but he’s also a Werebear who accidentally killed a boy in a glad match, and Simone can’t stand how much she likes him. There’s two-foot tall Wally Dorsey, who’s determined to pilot a personalized mech. His best friend, Beasley Gardner, is a mountain of a young girl with enough muscle to beat up any boy at school, but she’s suffers from a rage disorder. Finally, Simone meets Kimberlee Newkirk, an unassuming Succubus who fears she’ll kill the next boy she kisses.

These defective students find themselves at the center of a deadly conflict when another student, Joss Beckwith, attracts a Rogue Artificial Intelligence, the new power brokers in a society radically changed by science and technology.

The Transhuman Warrior Series tells the story of Simone and her friends as they’re transformed into highly specialized human weapons. They must challenge the increasing power of the Rogues as these enemies push into Realspace with one goal in mind: total domination.

For more information, check out our website or visit the Transhuman Warrior Series page.

————
Excerpt
﻿Simone watched Rigon move to block as much of their sight as possible. What her mother was doing defied the best rational arguments her brother and his techno-bosses could make, so they hid such powers away at all costs, or, in today’s world, used them. Simone hated the fact she was both mesmerized and afraid of her mother, who now grasped two weapons that glowed with amber fire. She had always wanted to be like her, to be able to do the things her mother did. The lords granted Simone limited access to their beneficence, but she had never demonstrated such skills as her mother’s in channeling and summoning. Her mother could call things into being. She was a psy-sorceress, and a highly paid one.

Simone mumbled her mantra of centering as she watched her mother move in a delicate dance that looked like a dramatic performance.


“I am coming for you,” her mother said. Joss was no longer Joss. His eyes had rolled back in his head, and he stood rigid. “I’ve got you now. Send your messenger, you intemperate void beasts.”


Simone backed up; it was dangerous to be so close … to her mother. Joss roared a deep-bellied roar that sounded as if it echoed up from an abyss. He fell to his knees and his neck snapped back so that he faced the ceiling as would a spigot.


“Come on out,” her mother said, her arms continuing the seductive dance with the weapons. “You little pretenders.”