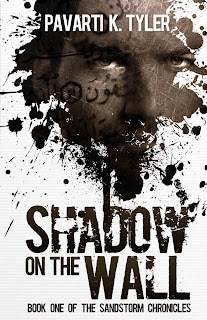 
Summary:
WINNER OF THE GENERAL FICTION/NOVEL CATEGORY OF THE 2012 NEXT GENERATION INDIE BOOK AWARDS! (2012)

Controversial and daring, Shadow on the Wall details the transformation of Recai Osman from complicated man to Superhero. Forced to witness the cruelty of the Morality Police in his home city of Elih, Turkey, Recai is called upon by the power of the desert to be the vehicle of change. Does he have the strength to answer Allah’s call or will his dark past and self doubt stand in his way?

Pulling on his faith in Allah, the friendship of a Jewish father-figure and a deeply held belief that his people deserve better, Recai Osman must become The SandStorm.

In the tradition of books by Margaret Atwood and Salman Rushdie, Shadow on the Wall tackles issues of religion, gender, corruption and the basic human condition. Beautiful and challenging, this is not a book to miss.

I didn’t know exactly what to expect when I started reading Shadows on the Wall, but I am glad to admit that I was blown away by what I did read. This story is so captivating and powerful that I simply would not hesitate to recommend it almost everyone that I know. It was a novel that really grabbed at me, that I couldn’t stop thinking about, something that made me think and one that I just instantly fell in love with. It is a brilliant beginning to a new series and I am most definitely looking forward to reading on. It reminded me, in parts and in certain ways, of Khaled Hosseini’s novels and as they’re in my top favourites, it was only natural for me to love this novel a lot.
I feel that the first thing that must be noted is that this is most definitely an adult book. I’ve been reviewing a lot of YA lately so I wanted to clarify that straight away. I also feel that a warning should be noted about how graphic this book is. I feel that the violence is justified and really helps to make the book more powerful but I also know that this is not something that everyone else will agree with and so I would advise those who dislike graphic violent books to steer clear of this read. It is this violence, however, that really brought this book to life for me. I understood how Recai must have felt – somewhat – and it just really made the book feel so realistic – there is no avoiding the dark and dangerous path.
The narrative of this book switches POV between the main characters which I found really interesting but I also got confused at certain moments and had to back track to remember who I was reading. But this is probably because I was reading it so quickly as well because I was just so gripped to the storyline. I liked how it showed what was happening elsewhere at the same time to help interlink all the stories together and there were a few shocking moments when revelations were revealed that had me shocked to my very core. I loved that about it; I simply didn’t see any of it coming!
What helps to make this novel even better are the stunning characters. Not one character is without flaws in this story and it really manages to help make them feel more realistic. I found it hard to truly connect with all the characters in this story – and there were quite a few important ones to remember as well – but I really liked Recai, Hasad and Maryam. I feel, for me, that their story together was the better story. They were so interesting to read about and I loved their interactions together. At first I found Darya to be rather irritating, especially as the story continued but by the end of the story I found her to be a lot more interesting. I’m still not completely hooked on her character but this may definitely change in the next instalment.


It would be impossible to leave this review without talking about the religious connotations of this novel. Pavarti has written a very powerful, political piece of writing without explicitly stating what she is trying to do within the words. It is an entertaining story that forces the reader to think, not just about the novel, but about the world they live in. I find this is absolutely amazing and is one of the things I like most about novels; they have the power to be controversial and stand the test of time. I felt that the message that she was trying to get across in this novel is extremely important, especially in the world today and I felt that it wasn’t too overpowered – especially as the story is a kind of superhero tale.


Overall, this was a story that I enjoyed, found enthralling and really made me think. It also made me remember just how much I like foreign novels and need to read more of them. It was powerful and emotional and graphic and just really grabbed at me. I would happily recommend it to adults who want a controversial read that is different and unique and also to anyone who wants to read a superhero novel with a slight twist. It was definitely enjoyable and interesting throughout and will leave people wanting to read the next book straight away. I, for one, want to know what else will help – will it all help?

Pavarti K Tyler is an artist, wife, mother and number cruncher. She graduated Smith College in 1999 with a degree in Theatre. After graduation, she moved to New York, where she worked as a Dramaturge, Assistant Director and Production Manager on productions both on and off Broadway.
Later, Pavarti went to work in the finance industry as a freelance accountant for several international law firms.  She now operates her own accounting firm in the Washington DC area, where she lives with her husband, two daughters and two terrible dogs.  When not preparing taxes, she is hard at work as the Director of Publicity at Novel Publicity and penning her next novel.

Behind the Blog #4 - Connecting The Lines