Hi All!
I’m here today to introduce you to the ever wonderful Sita Brahmachari who is here today with a very powerful guest post on Racism. This is all to help share the news about her new book which released yesterday! More information about it below. 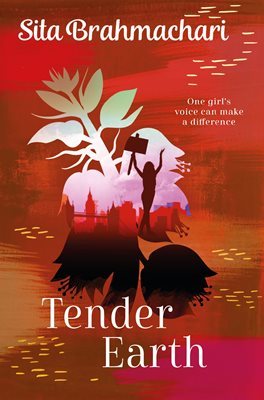 Laila Levenson has always been the baby of the family, but now with her older siblings, Mira and Krish, leaving home just as she starts secondary school, everything feels like it’s changing… can the reappearance of Nana Josie’s Protest Book and the spirit it releases in Laila, her friends and her local community, help her find her own voice and discover what she truly believes in?

A powerful chime rings through Laila’s mind, guiding her to walk the footsteps of the past on her way to discover her own future.

Tender Earth is endorsed by Amnesty International UK because ‘it illuminates the importance of equality, friendship and solidarity, and upholds our right to protest against injustice.’

HERE WE STAND AGAINST HATE

SILENCE ABOUT RACISM IS NEVER GOLDEN

ANTI-SEMITISM, ANY RACISM, NOT IN OUR NAMES

I began writing Tender Earth three years ago because I began to see the rise of racism, and hear racially-orientated language spoken more often in public places. Following the terror attacks in Paris I wrote an article about how young people are coping with the fear and distrust that is created following these and more recent attacks, and by the language we hear in the media around immigration and the treatment of refugee people. I was so saddened to hear recently of the attack on a young refugee boy, Reker Ahmed, in Croydon, London, who was attacked by thirteen people in a suspected hate crime, leaving him horribly injured.

Since the EU referendum vote police have reported a 57% increase in hate crimes related to race and religion.

For my own children and their generation, I had hoped that racially and religiously motivated crime would be a thing of the past, sadly this is not the case for any of us today and so Laila and her friends are having to face the ugly truth about racism in Tender Earth. In this excerpt Pari Pashaei, who is the child of an Iraqi refugee family, speaks of her fears:

Pari leans in close. ‘You know what Stella was saying about people not saying what they’re really thinking? She’s right. Sometimes I get this look from strangers like they’re suspicious of me or just don’t like the look of me because I’m a Muslim. Mum thinks I should stop wearing my headscarf and she doesn’t like these,’ she points to her sparkly scarf clips, ‘- she says I’m drawing attention to myself.’
‘That’s not right! Why don’t you tell Mrs Latif?’
‘What could she do about what goes on out there? She can’t have a word with strangers like she did with Stella. People outside of school don’t have to say sorry, do they? Anyway, it’s just a feeling. No one actually says anything. But Mum thinks everything’s getting much worse for us here now. No one trusts anyone else.’

Sadly, the events that take place in Tender Earth require the characters to decide if they will take a stand against racially and religiously motivated crimes or stay silent.

Does seeing, reading about and experiencing racism and religious intolerance in this country and throughout the world trouble you as much as it does Laila, Pari and her friends? If it does, click on these links that I used during my research… and consider converting thought into action and, as soon as you are legally able, VOTE for what you believe in.

What can you do?
https://itstopswithme.humanrights.gov.au/resources/what-you-say-matters/what-can-you-do

More books to read that stand up for human rights
https://www.theguardian.com/childrens-books-site/2015/jan/12/books-breed-tolerance-children-read-errorist-attacks-paris

The inspiration that is Malala Yousafzai
https://www.expressandstar.com/news/2016/10/10/malala-yousafzai-and-archbishop-of-canterbury-in-dudley-watch-our-exclusive-interview/

How can a symbol be such a powerful force?
http://www.telegraph.co.uk/news/uknews/terrorism-in-the-uk/11367966/The-rising-tide-of-anti-Semitism.html

Youth Against Racism In Europe
http://www.yre.org.uk/

Where do you stand against Racism?