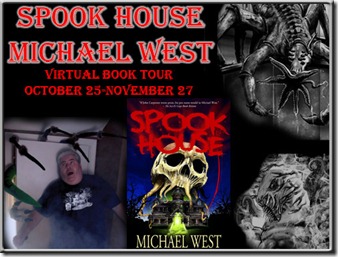 Hey Guys!
So today I am the tour stop for Spook House by Michael West.
I have had the pleasure of reading this book and below is my review of it.
If you click the banner, you will be taken to the tour page to see the rest of the blogs participating in this tour.
Enjoy! 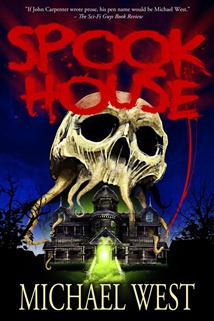 There are some places in this world that go far beyond any normal definition of “haunted.” These places are so evil, so diabolical, that they become gateways to Hell itself. The Fuller Farm is one such place.

It is said that old man Fuller conducted unspeakable acts, blood rituals and human sacrifices, all in an attempt to gain the ultimate knowledge, the ultimate power. And then, he was killed–horribly murdered on his own lands, leaving the house to stand as a vacant monument to his wickedness. But once a door is opened, it can never really be closed.

Now, the stars are right. The gateway is ready to once more unleash unspeakable horror upon the town of Harmony, Indiana. And this will be one Halloween that they will never forget!

Disclosure of Material Connection: I received this book for review from Seventh Star Press author as part of a virtual book tour. I was not compensated nor was I required to write a positive review. The opinions I have expressed are my own. I am disclosing this in accordance with the Federal Trade Commission’s 16 CFR, Part 255: “Guides Concerning the Use of Endorsements and Testimonials in Advertising.”

The Hesitation Before
The very first thing that must be mentioned is that while this is the third book in the series, you do not need to read the first two books in the series to understand and enjoy this book. I didn’t and I still really enjoyed this book and everything that it had to offer. It has been a long time since I have read anything quite like this book before and I am so glad that I signed up for this tour as it gave me a chance to get back into this genre. I found this book to be thoroughly enjoyable, tense, and if I feared more, probably a little horrifying too. It is a truly imaginative novel that was interesting, intriguing and page-turning and I would highly recommend others to read it too. But here are some reasons as to why you should.

The Journey Begins
With the tension continuously building throughout this novel, I can really only describe the plot of this book to be wonderfully written and enthralling. The beginning of this novel starts with a stereotypical horror-movie beginning – the characters even mention how like a horror movie it actually is. I found this to be really interesting and as usual, found myself rolling my eyes at one of the characters’ behaviours. But then the book took off. It was one thing after another, with the tension simply growing as the action became fast paced, exciting and intense. It’s not long before you feel that you cannot put the book down and simply have to get to the end to know how it ends. Will it all work out? What will happen? Questions spiral the mind and fortunately, by the end, everything is answered. But then, with just a few more pages to go, it is made abundantly clear that this is not the end of it all, not just yet. I, for one, am definitely looking forward to reading more of this series.

For The People
There were many things to love about this book; the plot, the monsters, the tension, the writing style, and the characters. The characters were all well-written and were fully three-dimensional characters with no mary-sues in sight. Michael has a way of truly introducing new characters that gives you a good insight into them and their backgrounds. It explains why they behave the way they do and helps you to become attached to them – even the ones who turn out to be the villains of the piece. It is clear that he knows what he is doing, which is good as with the amount of times that the POV of this book changes, it could have ended in a capital disaster. One of the characters I loved reading about the most was Officer Ricks and I always had a little smile on my face when he appeared, and he wasn’t even one of the main characters.

Robby, the male protagonist of this story, captured my heart easily. He was traumatised by his history but he used it to do good. He was caring, protective and completely gentlemanly. I adored reading about him and continuously cheered him on throughout the book. He’s a character that should play by the rules because of his job but he continuously goes against them, doing what he needs to do to save what he needs to save. He’s brash and often acts first, thinks later, but that just makes him more lovable in my book. Sheri, the female protagonist of this story, was also a character I liked quite a bit. She had a lot to deal with because of Jeff and Robby and all the new and uncertain things happening in her life. She was strong, full of fight and yet completely and utterly hopeless and scared at the same time. A brilliant character who just wanted to get through what she had to without losing herself in the process.

Could Change
This story is written from the POV of all the characters in the story. This style I have seen before in stories and sometimes it is a style that falls flat and makes the story unattainable and boring but this is certainly not the case for Spook House. Michael has managed to show the story from many different perspectives, flowing different emotions and scenarios throughout the book which helped to keep the tension high and the page turning. Just as a part got truly exciting and you needed to know what happened next, he would switch to a different character, show how they got to the same point you were just at – or beyond it – and then continue. It kept you moving through the book at a speed because you needed to know what was going to happen to the previous character you were reading about. I truly enjoyed this style as it gave a 360 degree view of the world and story that you were reading but I do know that this is not a style that everyone will enjoy. If you dislike stories like that, I would definitely advise staying away from this book.

Everything Completely
All in all, this is a book that is truly fascinating and interesting. A book that keeps you on your toes throughout the book, and rewards you for reading through to the end by having a dramatic and intense ending, that is truly exciting. It is a thoroughly enjoyable read that holds interesting and creative monsters and therefore, may not be the best book for the easily scared. It holds interesting thoughts about hell and alternative dimensions that add just that little bit more to the book. It is one story that I am incredibly glad to have read and I will now be making sure I go and read the first two stories in this series, just so that I can read more of the characters and of Michael West’s writing style. I would recommend this book to anyone that enjoys fantasy, horror, and mystery all rolled into one. It is a captivating and intense read and it is definitely not for the easily scared or the light-hearted. So if you’re in the mood for something that may have the power to keep you up at night, this is the book you should read. 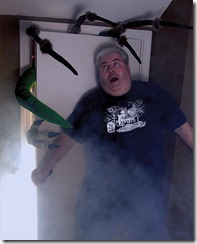 Michael West is the critically-acclaimed author of The Wide Game, Cinema of Shadows, Skull Full of Kisses, and The Legacy of the Gods series. He lives and works in the Indianapolis area with his wife, their two children, their bird, Rodan, their turtle, Gamera, and their dog, King Seesar.

Every Halloween, he turns his garage into a haunted house.

Kill Me Softly by Sarah Cross