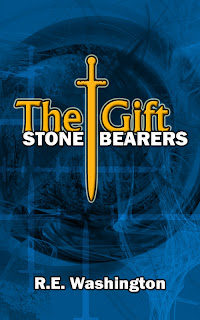 There’s a war going on and humanity is the prize.
Caught in a battle between two supernatural forces, five junior high students are killed. But Constance, Jonathan Avery, Maria, and Danielle return from the dead — and they’ve changed.
They each carry a piece of a soul stone and with it they have extraordinary powers. Now they can summon weapons from thin air and even start fires with their minds. With these powers comes a connection they never wanted, and coming back from the dead hasn’t wiped away the grudges between them. When one of them loses themselves to the power, they are soon caught in a battle against themselves and an enemy that wants to make sure that this time they stay dead.

FOUR OUT OF FIVE STARS ****
This is a nice short novel that is really interesting and very enjoyable. There were some bits that annoyed me or that I didn’t quite understand but moving past this it was simply a unique and lovely story that I cannot wait to read more of. It tells the tale of a group of five students who, under normal circumstances, would never run around in the same circle but due to an unfortunate situation they find themselves in a predicament where working against each other will only lead to their own destruction. They’re suddenly thrust into a world unknown to them and must learn how to deal with it all but before they get a chance to get a grip on it all, an evil is waiting to tear them all apart and kill them all once and for all.
One of the things I liked about this story was the characters. I liked how they all had their own unique and different personalities and how it portrays how difficult it is for teenagers to get along unless they simply have to. definitely got these character’s down and I just really loved reading about how it all goes down and how they grow throughout this short story. The only problem I found with the characters was the background description. I just felt a little left behind, especially when it came to the relationships between the characters, most notably between Constance and Maria. But, it is possible to look past this as the story is quite intriguing on its own.

There is a uniqueness to the story and I really liked hearing about the different powers and the ways in which they are used and how they reflect on the characters’ traits when they’re not really supposed to. It was really intriguing and definitely made this a quick read for me as I simply wanted to know more! I also enjoyed how it has quite clearly set its self up for a sequel and left the first book on a little bit of a cliffhanger which just makes the reader want to know more. I think that there can be so much more explored within this novel and just think some of the imagination behind it is truly amazing. So, I am waiting with baited breath to read more of this story!
One of the most refreshing things about this novel is how it isn’t focussed on romance between the characters. While that may occur later on in the novel as there is clearly pairings occurring or already there, I like that it isn’t central to the narrative. This story is clearly focussed on friendships between peer groups as opposed to romance and I think that, that is such a refreshing thing as there aren’t that many stories like that around, or not that I’ve yet noticed! I’m definitely interested to see how this pans out as it is always interesting when five different personalities are forced to work together. A bit like how fun it is to stick two people who hate each other in a broken lift!
All in all, this is a decent novel that got me hooked and was a nice, easy read and something that has got me waiting with tender hooks for the next addition to the story. A recommended read to people who enjoy something different and unique and imaginative!
Faye