So today I am introducing you all to the wonderfully talented, Stephen Zimmer, author of the newly released Spirit of Fire. He is here today to talk about this book as part of the books tour.
I sent questions along and then he answered them but instead of the normal way this goes, he responded with a video for you all!
So I hope you guys enjoy it – I did! – and to continue following his tour, click the banner above!
Without further ado;
Did you like it?
Thank you so much for watching, I’m sure Stephen truly appreciates it!
To look at his website that he mentioned, feel free to click here.
———– 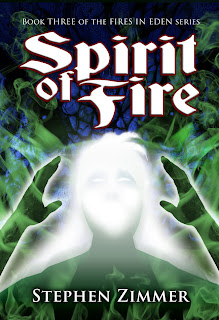 Book Three of the Fires of Eden series.
A maelstrom of war engulfs lands resisting the designs of the Unifier to bring about a new order, of a kind that has never existed within Ave.  Battered by a massive invasion force from Gallea, the tribal people of the Five Realms and their Midragardan allies are being driven eastward, towards the sea, while the Saxan lines are wearing down ever thinner on the Plains of Athelney.
Time is running out quickly, as an ancient creature of legend soars through the skies with a brave young Saxan.   They carry the desperate hopes of two realms sorely beset by a voracious enemy.

Diabolic entities conduct a great hunt, as a malignant darkness deepens across all of Ave.  Exiles from another world must gain refuge, or find themselves ensnared by the long reach of the Unifier.  The very nature of creation itself stands in the balance.
It is a time when the honor and fortitude of many are put to the test, and terrible prices are paid for resisting great evils.  It is also a time of awakening for many, old and young alike, some of whom may yet discover the spirit of fire that lies within.
The third installment in the Fires in Eden series, Spirit of Fire is richly imagined epic fantasy with a diverse ensemble of characters that offers a new world to explore for readers who enjoy large-scale tales along the likes of George R.R. Martin, Brandon Sanderson, Steven Erikson, and J.R.R. Tolkien.

Behind The Blog #5 - All Across the World

A Country Dilemma by Sarah Morgan