Hey Guys!
So today I am introducing you all to the wonderful Loukia Borrell! Her book, Raping Aphrodite is out now! Links to Amazon are underneath the interview! But, before I waste anymore of your time, let’s get on with it!

ebooks or hard copies?
hard
day or night?
day
reading or writing?
both
paper or computer?
both
tea or coffee?
neither
favourite book of the moment?
Mine, of course!
most memorable book?
“Vox” by Nicholson Baker
Thank you Loukia! It’s been a pleasure talking with you today!
To find out more on Loukia, or to chat with her yourself, you can find her in these places;
Twitter: @LoukiaBorrell
Goodreads: Loukia Borrell
Raping Aphrodite can be purchased from Amazon by clicking here. 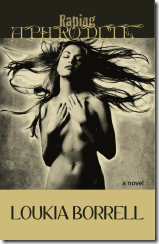 What if everything you know about your life is wrong? In “Raping Aphrodite,” Tash Colgate seems to have everything: a solid marriage, a successful career and a bright future. But all that changes when Tash agrees to display items from Cyprus in her art gallery, opening the door on long-held family secrets that, once exposed, will change the lives of everyone Tash knows and trusts.